I haven’t ridden a bike in more than ten years.

I made a promise to myself that I would never allow myself to get on one ever again. I couldn’t do it. I wouldn’t do it. Not after The Incident.

It was 4pm on 10th April 2002. I was cycling home from school. It was an unexpectedly warm day for this time of year in England and I quickly worked up a sweat, stopping by the side of the road to remove my jacket.

Carefully resting it over my handlebars, I set off home. Smiling as the sun beat down on my back, I allowed my mind to wander, thinking of all the homework I had to do, daydreaming of the three hundred ice creams that would be waiting for me…

And then it happened.

Somehow, my jacket managed to slip from my handlebars, falling onto my front wheel, forcing it backwards towards the brakes and causing the wheel to stop instantly.

I was thrown over the handlebars into the road and from that moment forward, I decided I would never ride again.

It was just too dangerous. 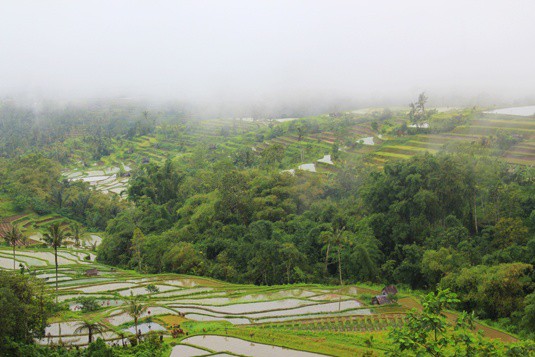 So when I was researching things to do in Ubud and came across Banyan Tree Bike Tours, I decided it was time to overcome my fears and excitedly booked a tour.

As I awoke on the morning of the tour to the sound of torrential rain, my desire to go cycling diminished even further. I felt familiar knots of tension growing in my stomach and as I watched the rain pound violently against the window I silently crossed my fingers, hoping that the tour would be cancelled.

It was time to go.

Our tour guide, Bagi, met us outside our guesthouse and we began our drive to the starting point, where we would have breakfast. It was located an hour outside of Ubud and while it usually offers spectacular views of the surrounding mountains and rice paddies, looked like this. 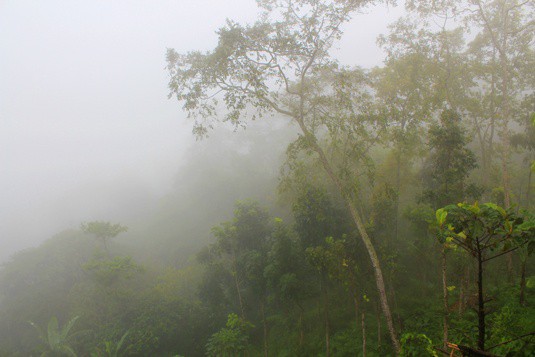 Most of our tour group were wearing rain jackets already, and as I looked down at my t-shirt, shorts and flip flops, I began to feel a little out of place. Although, at least without a jacket there wouldn’t be any danger of repeating The Incident.

Bagi was confident that the rain would stop within a few minutes and so to pass the time we had some pancakes and tried Balinese coffee (I hadn’t had coffee before and it tasted like burnt toast).

Bagi was right. As we scraped our plates clean, the rain had stopped, the mist was clearing and unfortunately there was no more putting it off.

It was time to face one of my biggest fears.

Feeling every eye upon me as I cautiously chose the smallest bike available, I decided to stand proudly next to it. I didn’t want to embarrass myself by sitting on it, in case I was made to, you know, ride it. Instead I smiled widely and did my best to look confident.

Right. I looked towards Dave for help, but all I received was a comment about how I have the balance and stability of a baby giraffe. There was no more avoiding this.

Taking a deep breath, I nervously scrambled onto the bike and prepared myself to fall. Putting my foot onto the pedal, I slowly moved forwards, wobbling violently as I rode a few metres before declaring that it was perfect!

Our first stop was a Balinese family compound, where we learnt about the Balinese way of life. In Bali, it is common to have at least three generations of the family living together in one compound! 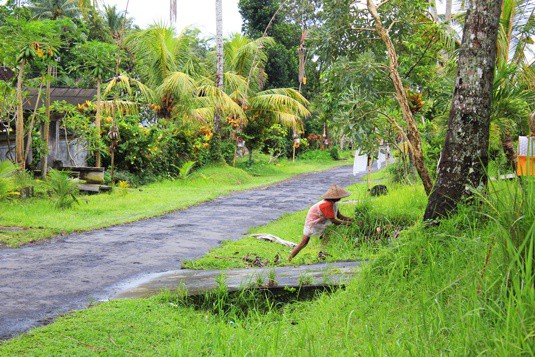 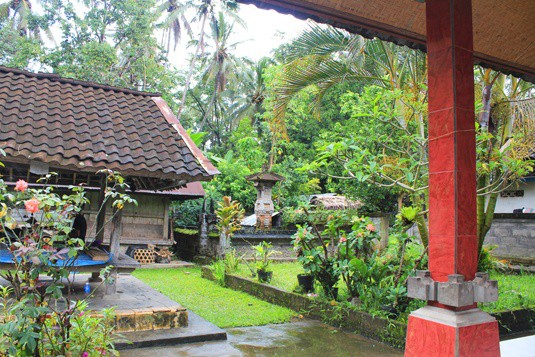 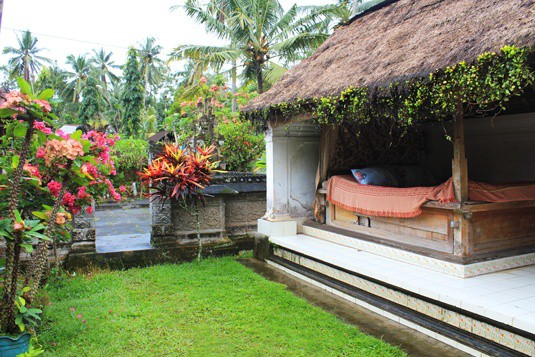 We left the compound and began our ride through the rice paddies of the countryside. The only word that I could use to describe the landscape would be green.

The scenery was so vibrant, so beautiful and, most importantly, flat. The riding was so much more enjoyable when I wasn’t panting, sweating and being pushed up a hill by one of the guides. Yes, that happened. 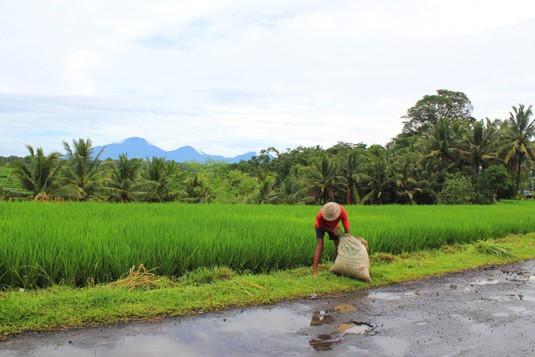 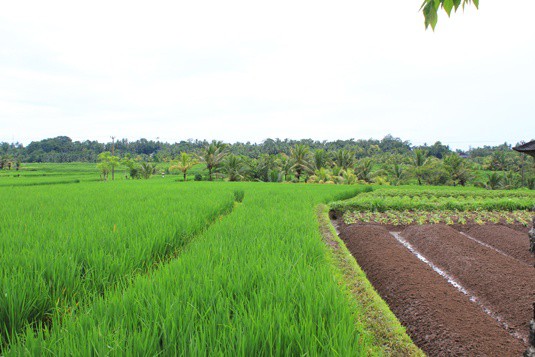 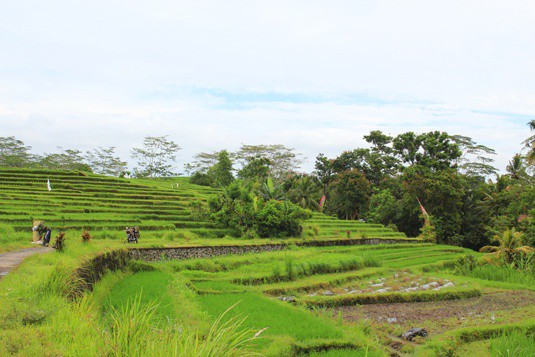 We approached the final part of the tour. The paved road I had become accustomed to quickly turned to very wet, and very slimy mud.

We were going through the rice paddies.

The next 30 minutes were spent trying to work out the best way to get across. It quickly became clear that riding the bike was not an option – it was impossible to ride faster than 5mph, the path was very narrow, and the wheels were sinking straight into the mud. No, the easiest way was going to be walking. 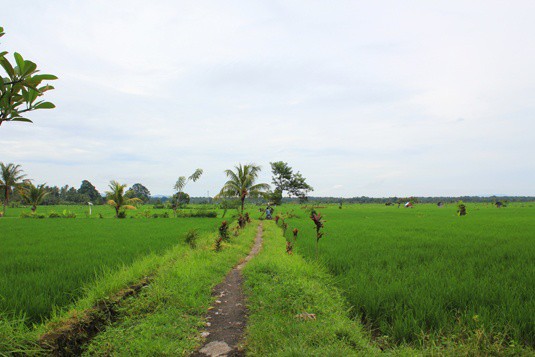 As the group happily skipped through the mud, I found myself slipping around like a dog on ice, crying out in terror every few seconds.

Why is this so hard?

And then I realised.

I was wearing flip flops.

I was wearing cheap flip flops. They had absolutely no grip and were without a doubt the worst footwear choice out of the entire group – all of whom were sensible enough to wear trainers.

With every step, my shoes sunk inches into the mud, covering my feet and ankles with the gooey slime, where they would remain. As I tried to move forwards, it became clear that my shoes were well and truly stuck.

Watching my tour group start to disappear into the distance, I anxiously tried to force myself onards. Frantically trying to lift up my feet, the mud slid across the top of my flip flop and my feet were now sliding all over the surface of that as well.

I was panicking now. Visions of me sinking further and further until I was up to my neck in mud flashed before me as I struggled to keep the bike upright.

Was the noise I made as I let go of the bike, lost all control of my feet and toppled over. Feeling warm water starting to creep over me, I smiled slightly. That felt nice.

I was lying flat on my back in a rice paddy.

My tour group had heard my scream and I looked over to see our guide frantically running over to help me. Looking past him, I could see Dave in hysterics, pointing his camera towards me with glee. 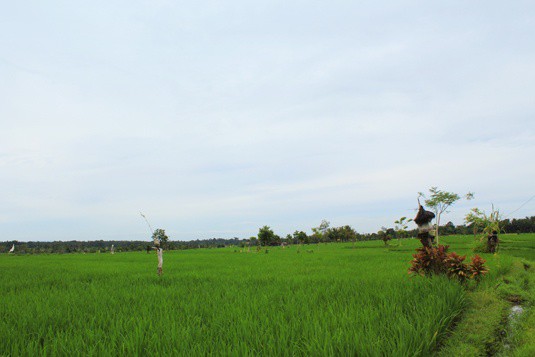 After I had recovered and washed myself off in a stream, I decided it was best to remove my flip flops for the rest of the tour, which didn’t make it any easier.

Sensing that I was now completely incapable of walking, one of the guides lifted my bike over his head and walked in front of me carrying it. I wasn’t going to complain about that! 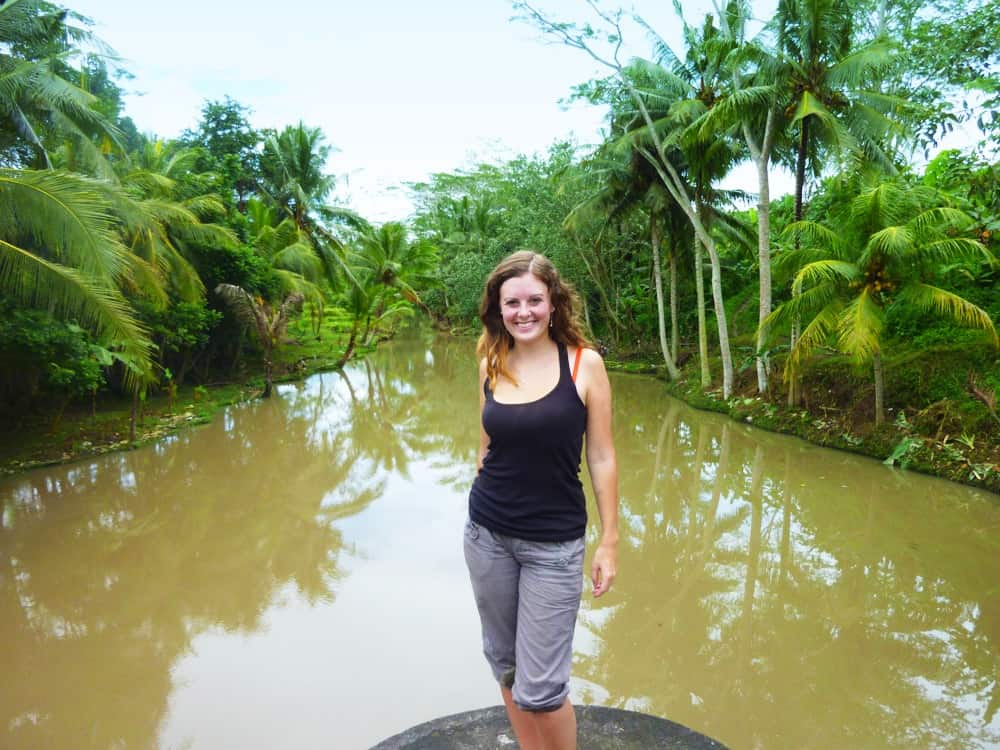 We finished off the tour with an easy and relaxing downhill ride to the van. On our way back home, Bagi invited us into his home and we had a lovely dinner cooked by his wife. It was the perfect end to the day.

Despite going for an unexpected swim, I really enjoyed my time cycling through the countryside. I’m glad I managed to conquer my fears and I would definitely recommend doing a cycling tour if you ever find yourself in Bali!

Disclaimer: I received a complimentary cycling tour from Banyan Tree Bike Tours. All opinions expressed are, as always, my own!

If you’d like to read a different take on the same story, Dave also wrote a post about our cycling tour!

Photos of Ridiculous Things on Bikes in Vietnam

Tickled Pink at the Barbie Cafe in Taipei