My travels in September were all about visiting my European oversights.

And then when I spotted a flight that would take me from Preveza, in Greece, to Berlin via Venice, I locked that shit down. Because Venice was yet another European oversight of mine, so why not cram it into my trip? I’d have a seven-hour layover with which to explore the city, and I was determined to do it justice while also not missing my onward flight.

And fun fact: this would be my first time ever at taking advantage of a short layover in a city. I’m usually either too nervous I’ll miss my flight or I’ll realise I have so much I want to see that I extend my stopover to several days.

Fortunately, layovering in Venice is easy to do, and despite my fiercely-held beliefs that I was going to miss my flight to Berlin, it ended up being a hassle-free experience and gave me an enjoyable first glimpse of the city.

Getting to Venice From the Airport

Venice’s airport has a left luggage section just outside of arrivals, which will make any layover immediately much easier. At just €6 for 24 hours, it’s a bargain! I left my backpack and brought with me my camera, phone, and money for the day.

From outside the left luggage area, you can then hop on an ATVO Venezia Express bus that takes you to Piazzale Roma, which comes in at €15 for a round-trip ride. Buses head from and to the airport every half an hour, so you’ll never have to wait long for one.

From Piazzale Roma, you can then either walk into the more tourist parts of Venice (it’s a 25 minute walk to get to St Mark’s Square), but I decided to hop on a vaporetto (water bus) instead. The Linea Uno (No. 1) vaporetto runs from Piazzale Roma along the length of the Grand Canal and costs €7,50 for a single journey.

Gondola rides are crazy-expensive (around €80 for a 40-minute ride) in Venice, and I would have also felt like a loner if I’d taken one on my own. The water buses, though, give you a similar experience at a much more affordable price. You still get to see Venice from the water, and if you manage to get to the front of the queue while you wait for the vaporetto, you’ll be able to nab a front row seat outside, where you can clearly see all of the action.

And it was on this journey that I fell in love with Venice.

I spent my entire vaporetto ride berating myself for having never been there before, wondering why nobody had insisted that I visit, and even thinking about how I would totally have my honeymoon there.

Venice was easily one of the prettiest places I’ve ever visited. 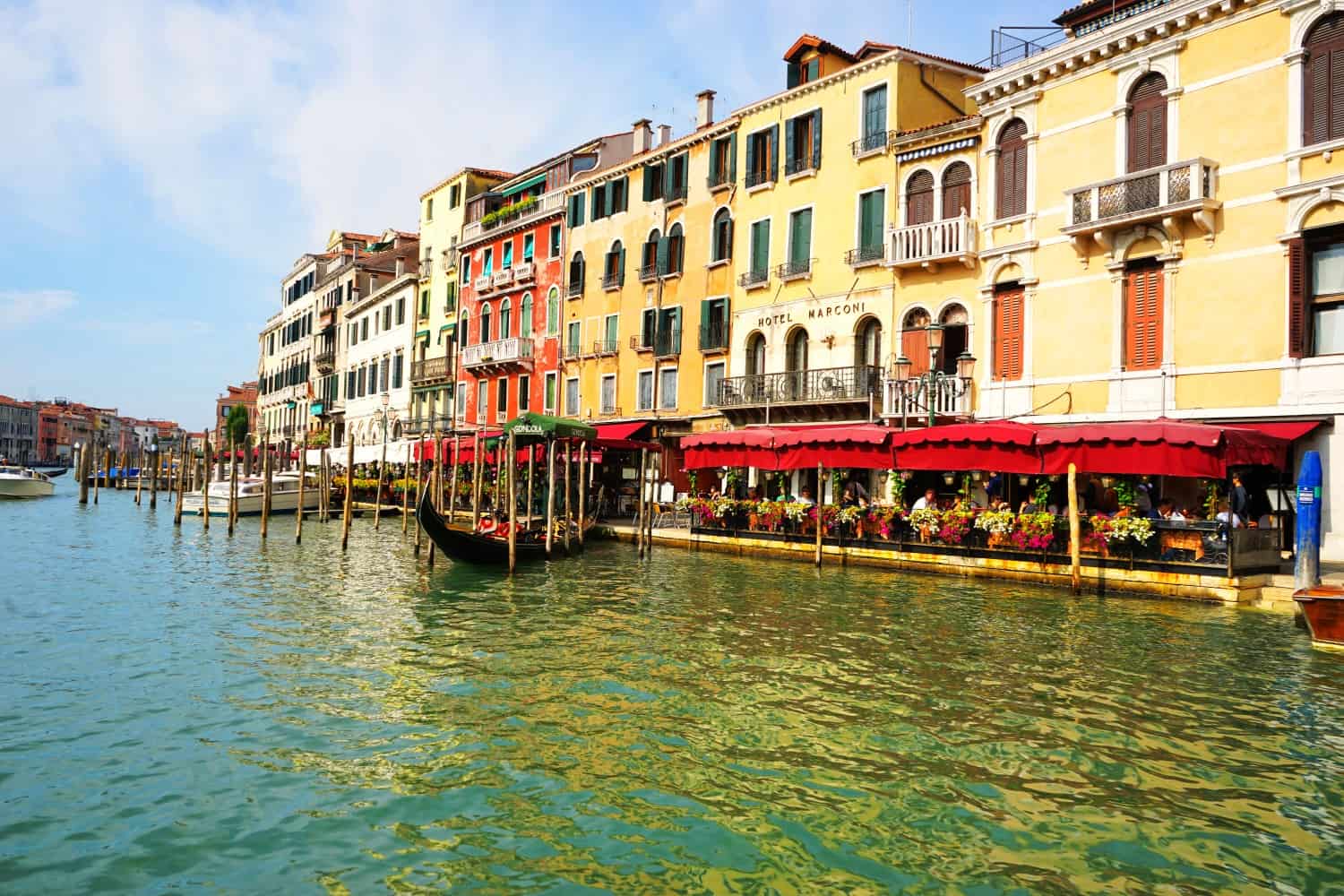 I stayed on the water bus until Sant’Elena, then dawdled my way back towards Piazza San Marco (St Mark’s Square), wandering down narrow alleyways and gazing up at the colourful buildings. I was falling more and more in love with Venice with every step.

And then, when I finally reached Piazza San Marco, I was greeted with scenes like these.

And suddenly Venice wasn’t quite so wonderful anymore.

So here’s the thing: I’d heard that Venice was crazy-chaotic in the summer months, but this was a random Tuesday in September, when all the kids were back in school. I really hadn’t expected it to be quite so busy.

Getting My Tourist On Regardless

But, of course, I can’t complain about there being tourists in Venice when I was also a tourist, so I pretended the crowds weren’t there and set about seeing as much as possible.

I fought my way through St Mark’s Square, checking out Doge’s Palace, the opulent St. Mark’s Basilica, and the campanile. Unfortunately, I had to admire them from the outside, because the queues were stretching back a hundred metres and I wanted to make sure I had time to see everything else.

I wandered across to the Bridge of Sighs, which was beautiful. The bridge connects Doge’s Palace with its prison, and on that bridge was where many criminals took their last glimpse of Venice before being locked up.

I couldn’t come to Venice and not sample some of the gelato, so I hopped online to google “best gelato venice”, and made my way over to Gelato Fantasy. I went for the strawberry cheesecake, and was it the best in Venice? Well, it was definitely the best I’ve ever tried.

And then I was all about getting lost. I had a couple of hours left before I’d have to make my way back to the airport, so I decided to spend them wandering down tiny alleyways and snapping photos of the picturesque canals.

And it was during this walk that I started to fall a little bit back in love with Venice. Away from the crowds, it can be so wonderful — it’s just really hard to escape them for more than a few minutes at a time.

My First Impressions of Venice

I have mixed feelings about my first visit to Venice.

When I was cruising along on the water, I absolutely adored it. I was making plans to visit every year, I couldn’t stop taking photos, and I was even placing it above Ljubljana as the prettiest city in Europe.

But as soon as I left the water, I struggled. There were just so. many. people. that it was probably one of the most crowded place I’ve ever been to. I hate crowds, and I especially hate crowds that are that large.

So it’s a bit of a love-hate relationship for me. I’m glad I visited, and I’m sure I’ll return at some point in the future, but yeah.

There were simply too many people for me to fully enjoy my time there.

Have you ever been to Venice? Was it that ridiculously crowded when you visited?

How to Spend Three Magnificent Days in Tbilisi, Georgia: A 2023 Itinerary

How to Spend Three Wondrous Days in Granada, Spain: A 2023 Itinerary

How to Spend Three Wonderful Days in Budapest: An Itinerary for 2023

How to Spend Three Magnificent Days in Rome: A 2023 Itinerary

The Cost of Travel in Belgium: My 2023 Budget Breakdown

How to Spend Two Fantastic Weeks in Germany: An Itinerary for First-Time Visitors

What to Buy for Someone Who Loves to Travel

The Cost of Travel in Greece (2023): My Detailed Budget Breakdown

Stepping Back in Time in Mbabane

Why Koh Mook is My New Favourite Thai Island