And when I was sat shivering on the icy cold minivan from Kalaw, surrounded by bundled up locals and watching my breath steam up the windows, I wondered if I shouldn’t have bothered.

When it came to planning my two weeks in Myanmar, I went back and forth over Inle Lake for weeks. I couldn’t find much more than half-hearted recommendations online, and everyone I spoke to told me there were better places. It’s full of tourists, they said. Everyone’s trying to rip you off; it’s too expensive; everyone’s just doing the same thing at the same time in the same way.

I went anyway, and now I was cold. 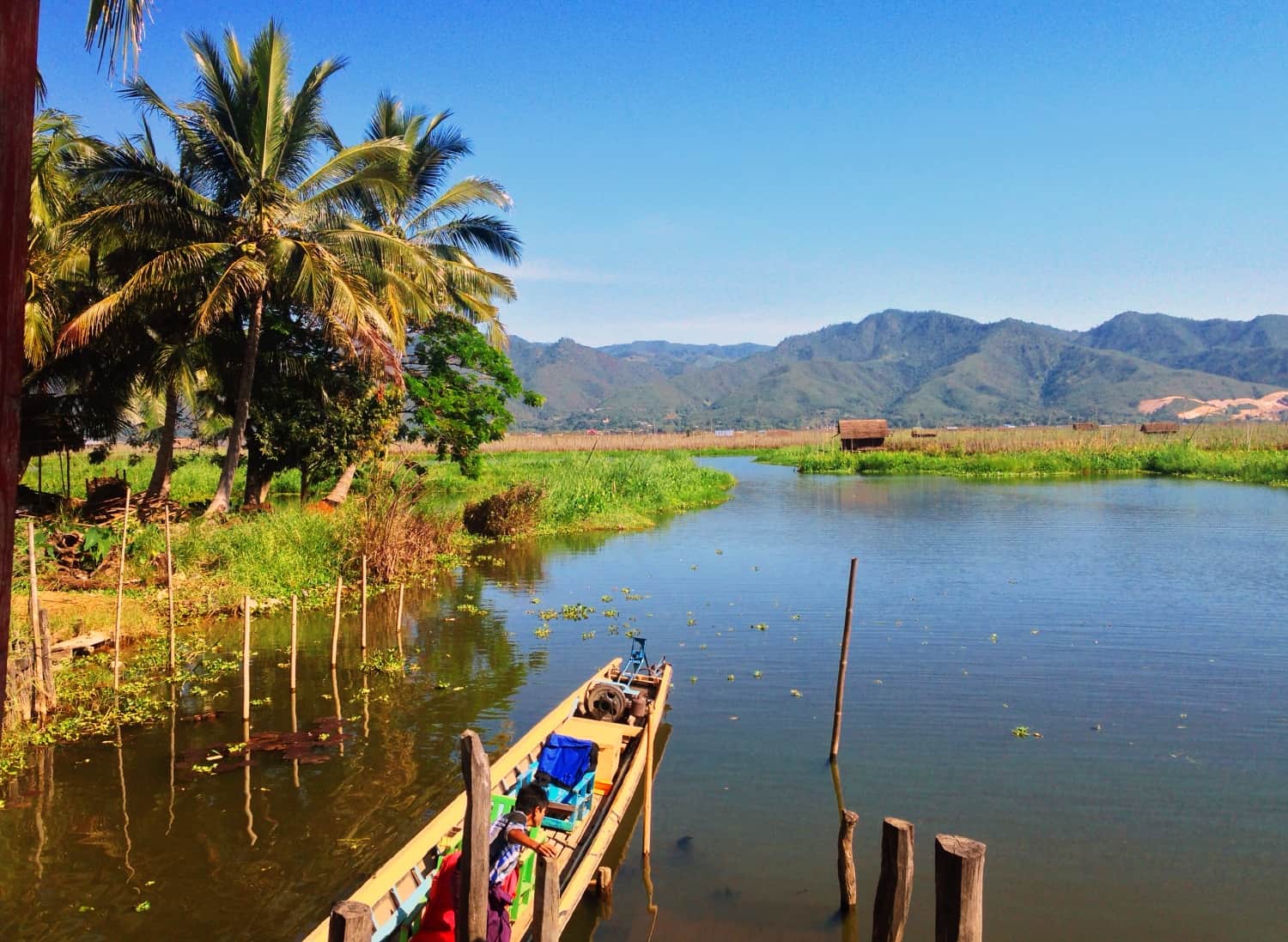 Slowly, we defrosted as we descended from the hills of Kalaw and towards Inle Lake. Our minivan dropped us off in the town of Shwe Nyaung and from there, we caught a taxi to Nyaung Shwe (yes, the names are really that similar, and yes, I still get them muddled up). Total cost of the three hour journey: $7.50. 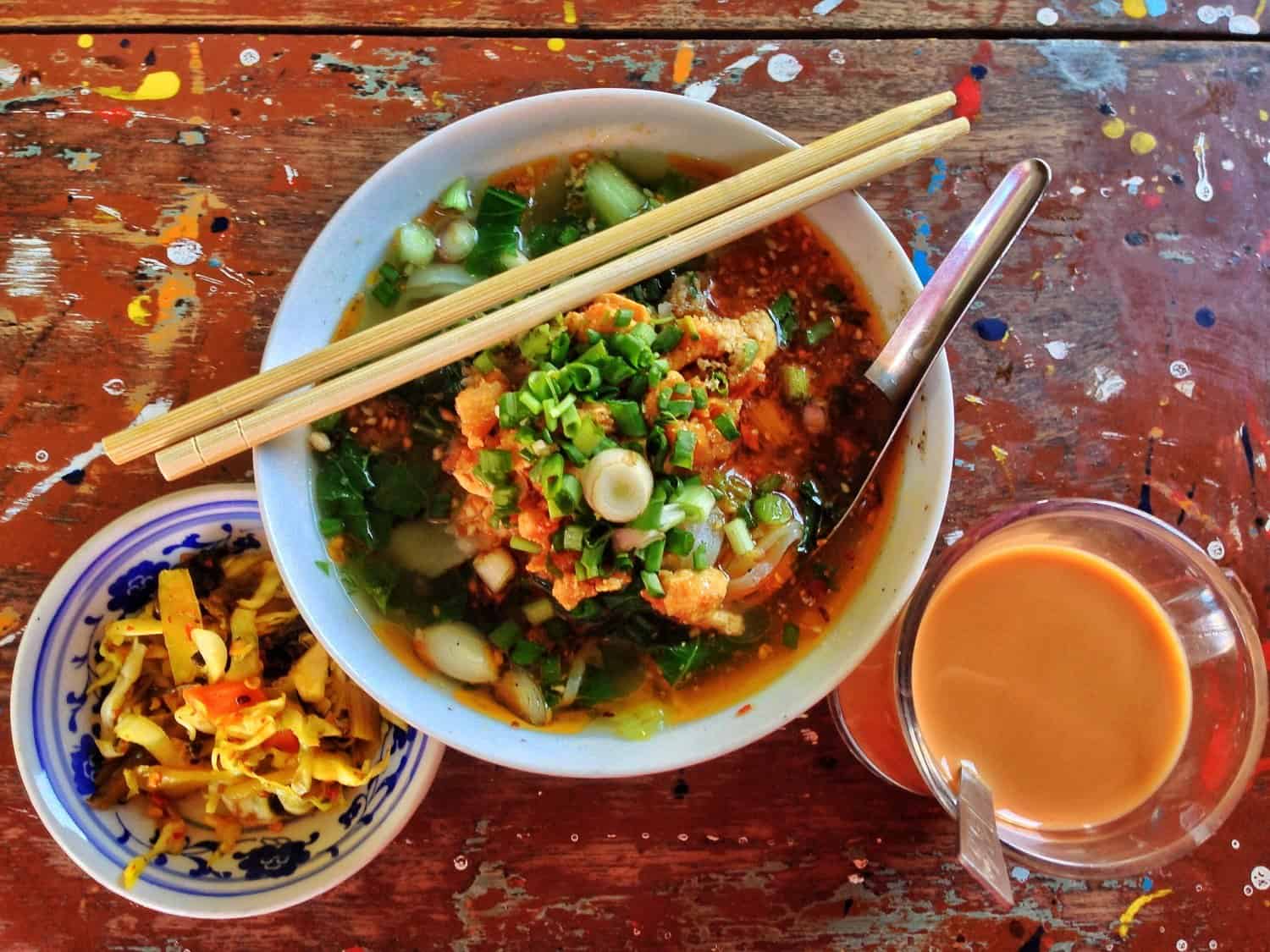 First on our agenda was finding something to eat, so Dave and I we set off in search of a steaming bowl of Mohinga, a fish noodle soup favourite and what had been our breakfast staple in Bagan. When our search proved unsuccessful, we settled on a bustling side-street restaurant instead. It was shaded and noisy, full of chattering locals and lined with wooden tables splattered with coloured paint. I liked it a lot.

Breakfast ended up being a bowl of delicious Shan noodle soup — another staple from my time in the country — and a spicy salad, three samosas, and two glasses of tea that comprised of what tasted like 80% condensed milk. Total price for breakfast? $2.

Myanmar has a reputation for being pricey, but if you eat local and travel overland it doesn’t have to be.

When it comes to accommodation, though, it’s hard to find a bargain. We checked in to our hotel: the $40-a-night Inle Lake Star. Our private room was clean, with air conditioning and surprisingly usable Wi-Fi (for Myanmar, at least), and the rooftop terrace and free local breakfast was a nice touch. Ultimately, it did feel a little too expensive for what we were getting, but you’ll get a cheaper price through booking online, rather than turning up like I did. Our main reason for choosing to stay there? The guesthouse was approximately twenty metres away from where you catch the boats to get on the lake. 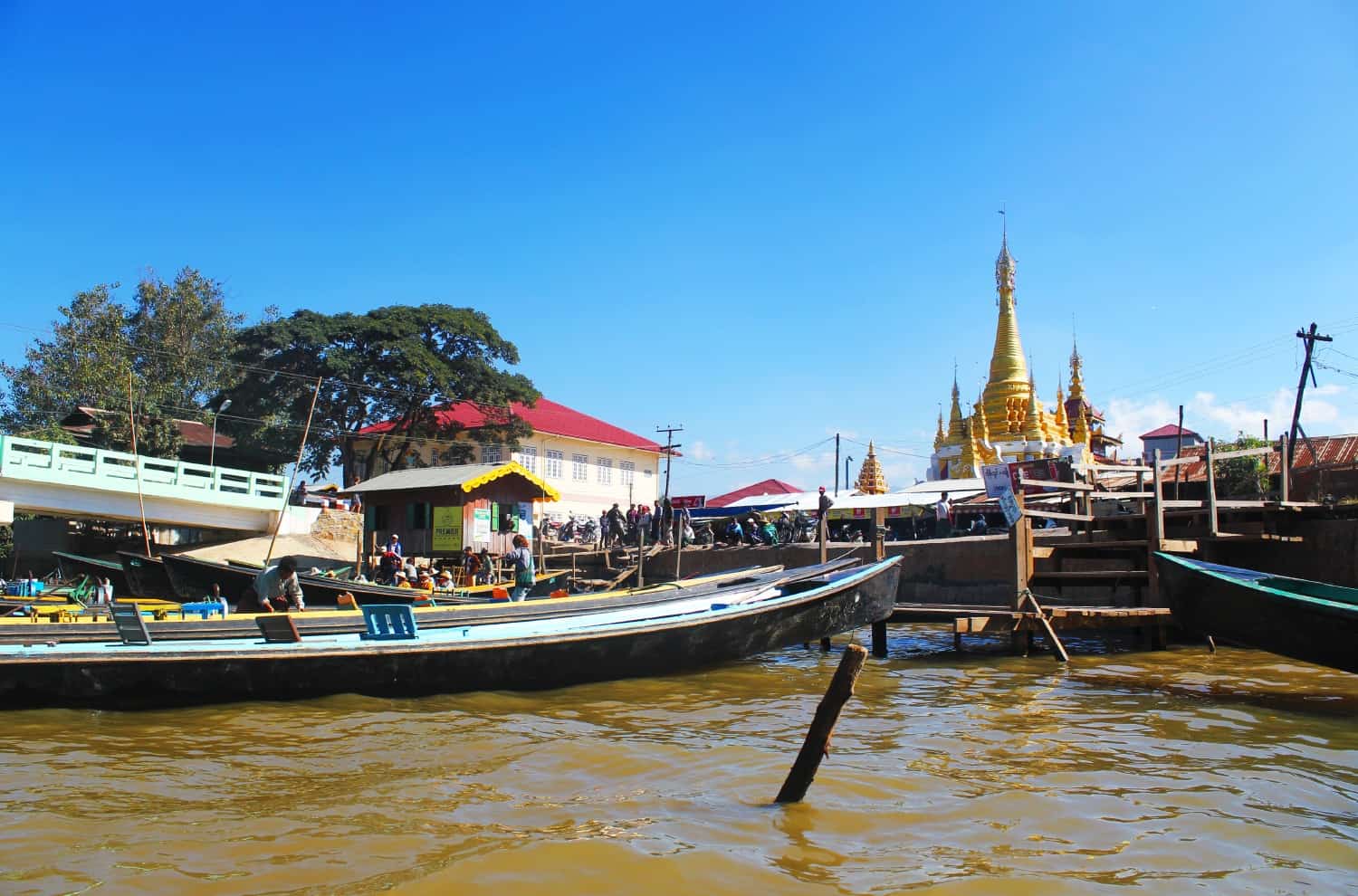 I was still suffering from occasional but extreme fatigue at this point, thanks to an exhausting nine-months-and-counting stint of mono, so retired to bed for the afternoon, while Dave walked for several hours to reach a nearby vineyard. I just asked him what his verdict of Burmese wine was, and he replied, “awful”.

By the time evening rolled around, I was back to feeling human and Dave was back from his walk, so we wandered outside to see about hiring a boat. For $15 each, we agreed to a sunset tour for that night and a half-day tour the following day. You could easily bargain for a cheaper price, but we were happy to pay without negotiation. 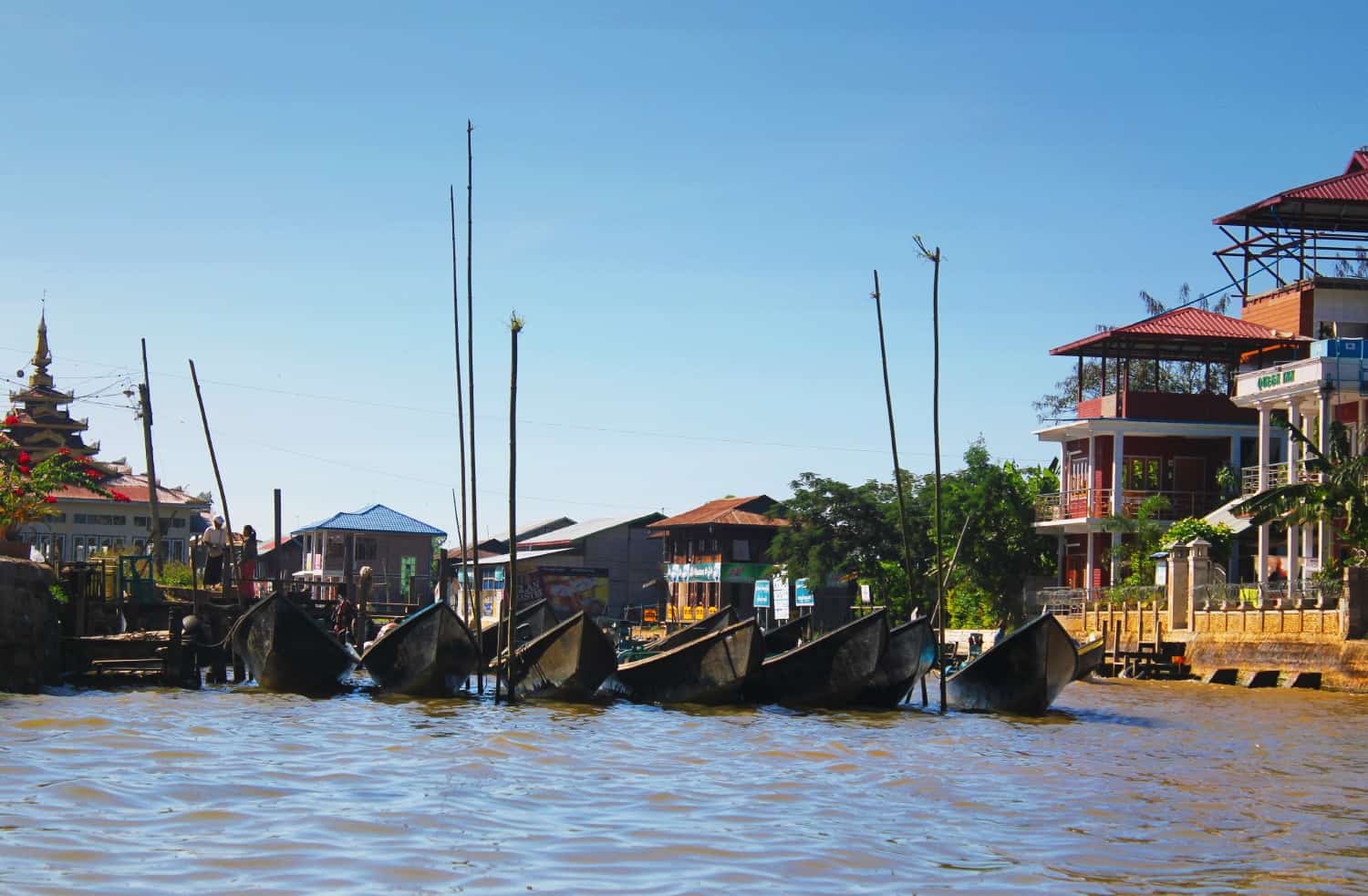 And then we were off!

And guys, THIS SUNSET CRUISE WAS ONE OF THE MOST AWKWARD MOMENTS OF MY LIFE. 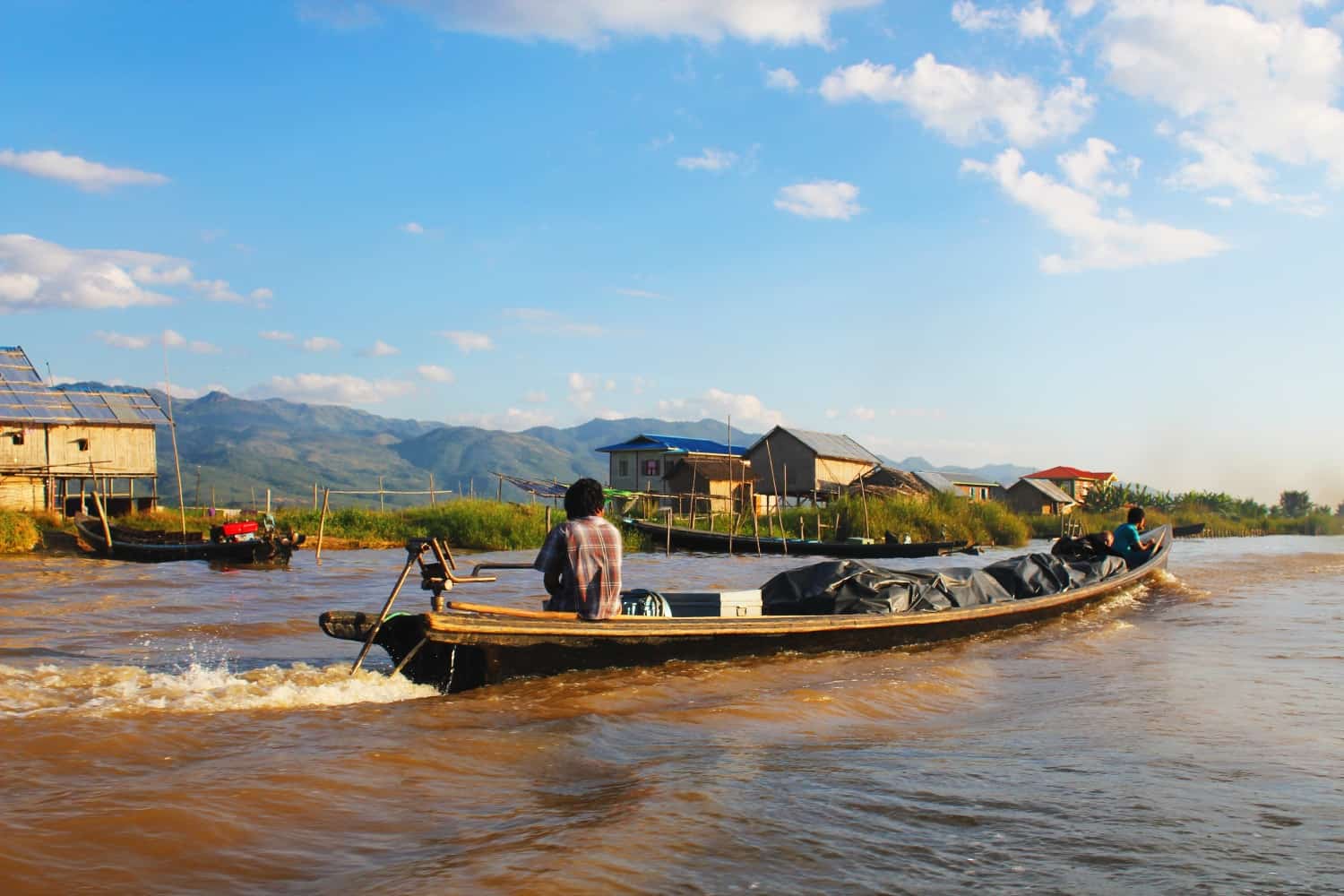 Here’s the deal: the boats are pretty narrow, so you end up sitting single file on plastic chairs, all facing in the same direction. We puttered down a canal and onto Inle Lake, and I immediately started snapping photos in every direction. It was beautiful.

Then I stopped taking photos because the fake fisherman began dancing at us in hope of a tip. Dave kept his camera raised and took a few photos, then handed them a thousand kyat. I then stole the photo he took of them; here it is: 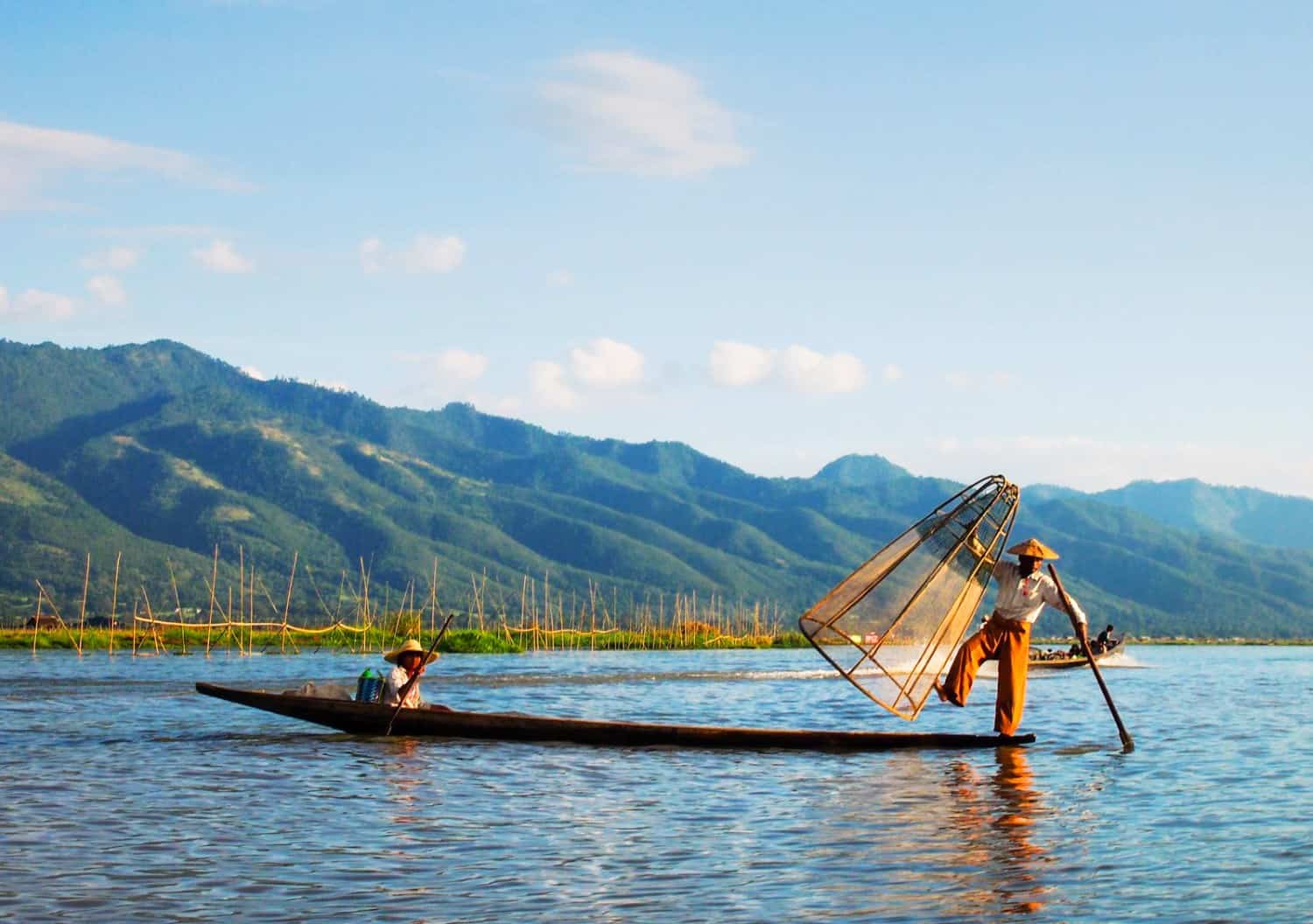 After five minutes of speeding across the lake, we stopped.

Silence that was broken only by the occasional click of my camera shutter. 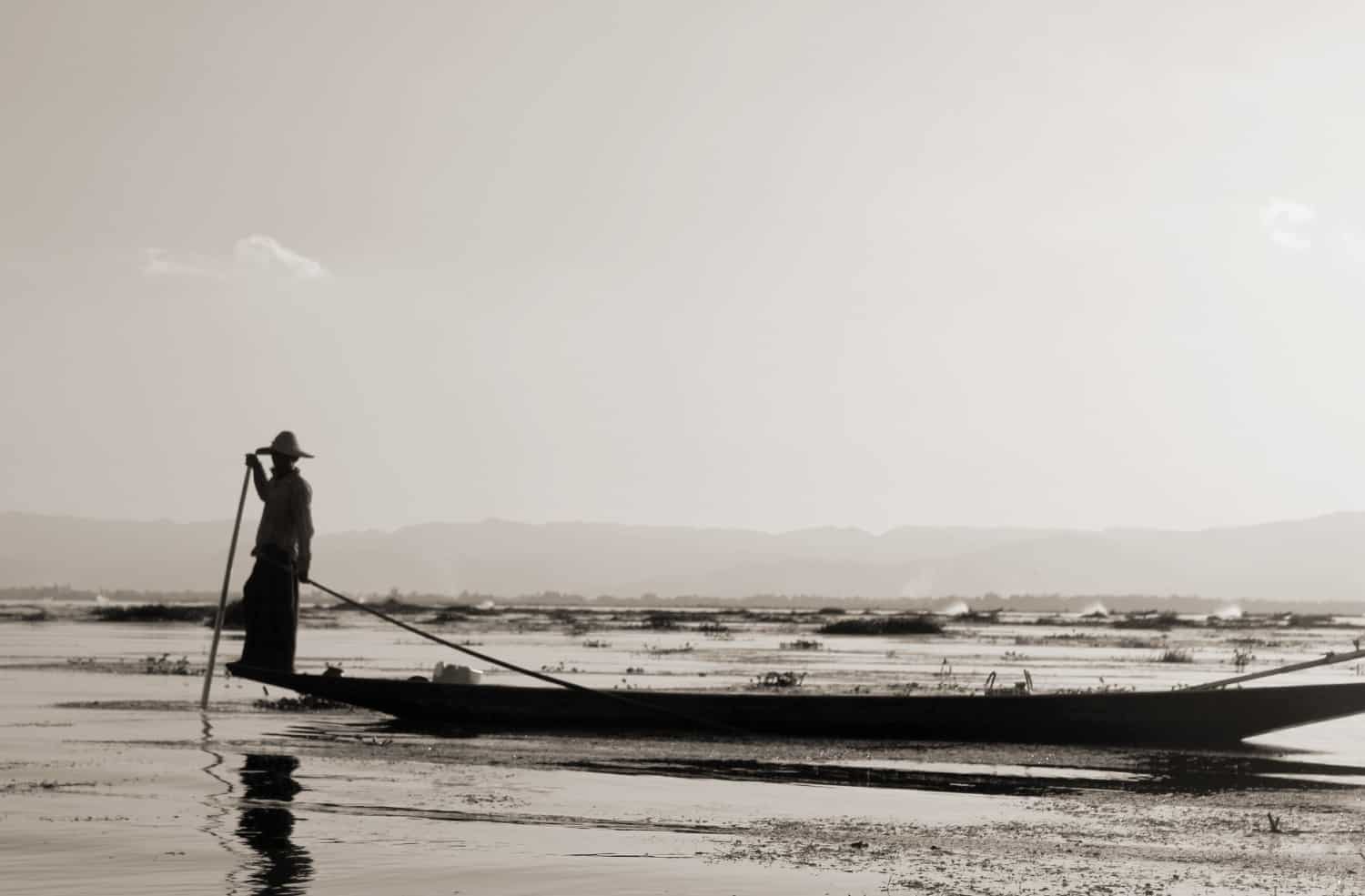 I estimated we had an hour until the sun would lower behind the mountains, and after a few minutes of craning my neck to check out the views, I began to stare at my feet in silent horror. This was awkward.

Water lapped against the side of the boat.

The driver drummed his fingers on his seat. 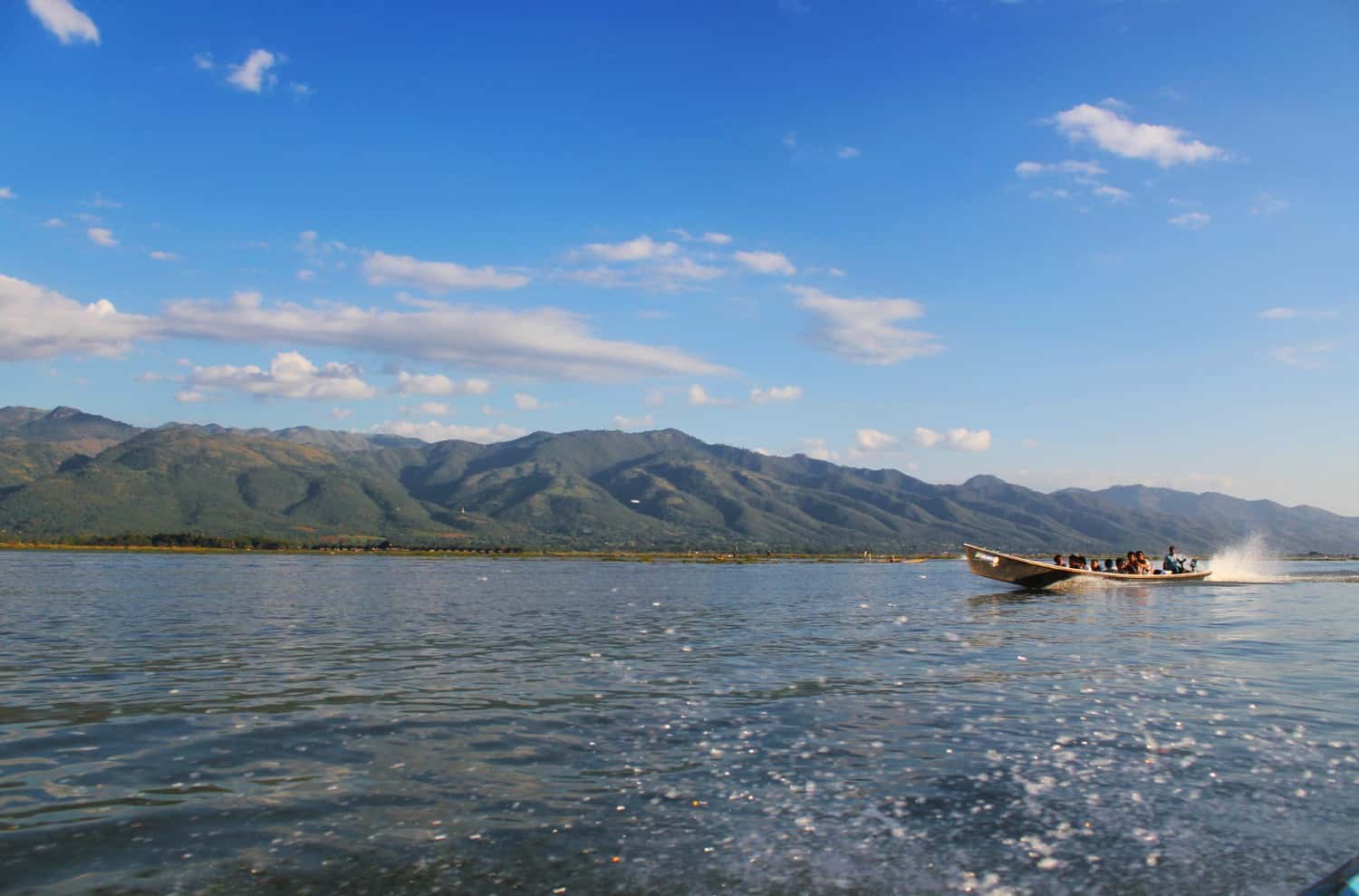 I cleared my throat.

I’ve seen a lot of sunsets over the past four years, and I can tell you that my hour of silence in the middle of Inle Lake was by far the slowest one ever. 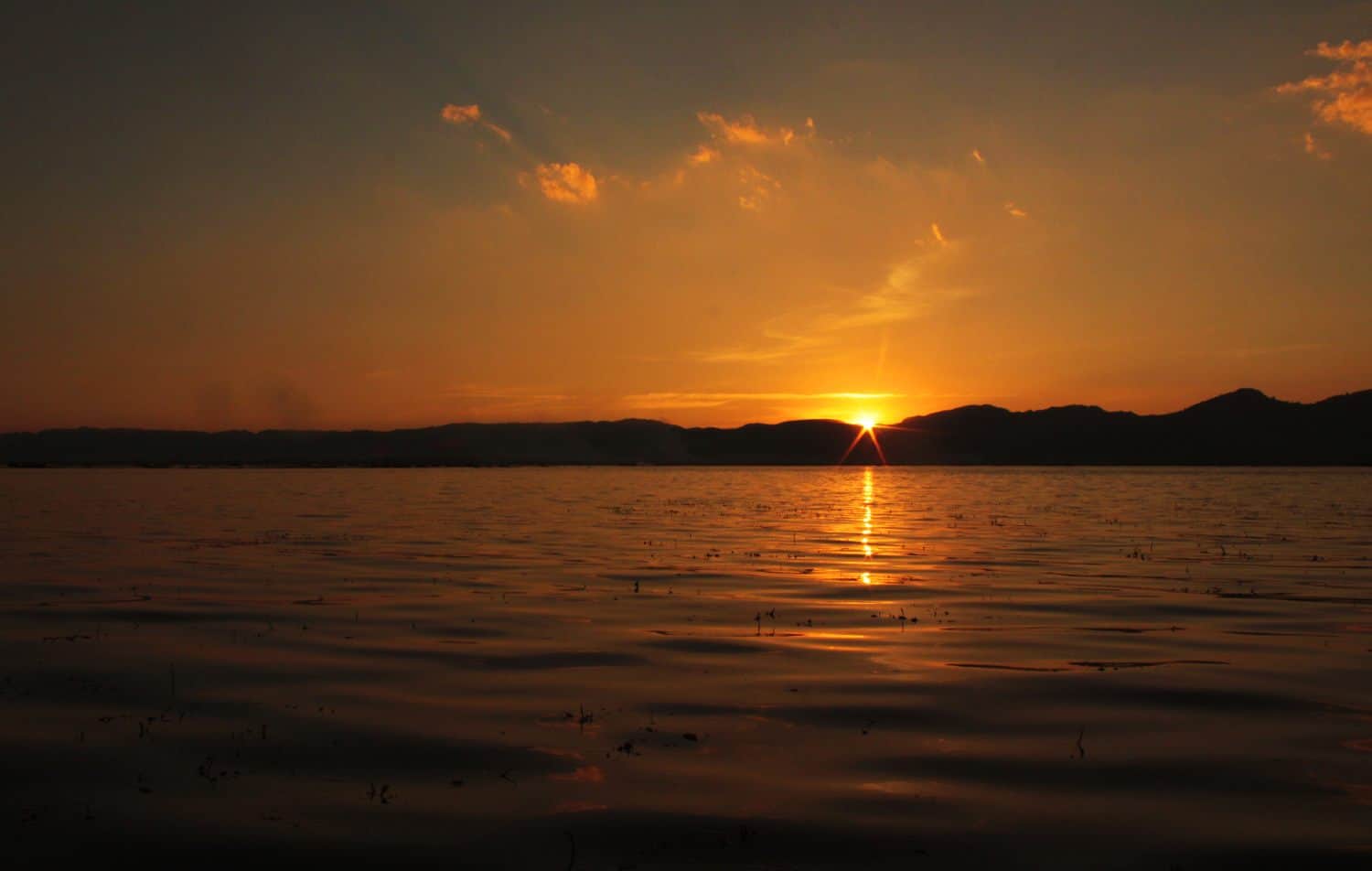 Next morning! After breakfast on the terrace overlooking the lake, we jumped back in our boat and set off to spend a half-day day on the water.

My expectations were not high. I’m not much of a tour person, and after reading this would likely be full of stops at factories and souvenir stops, I prepared myself for a day spent trying to explain that I didn’t have a house to put all of these trinkets in. 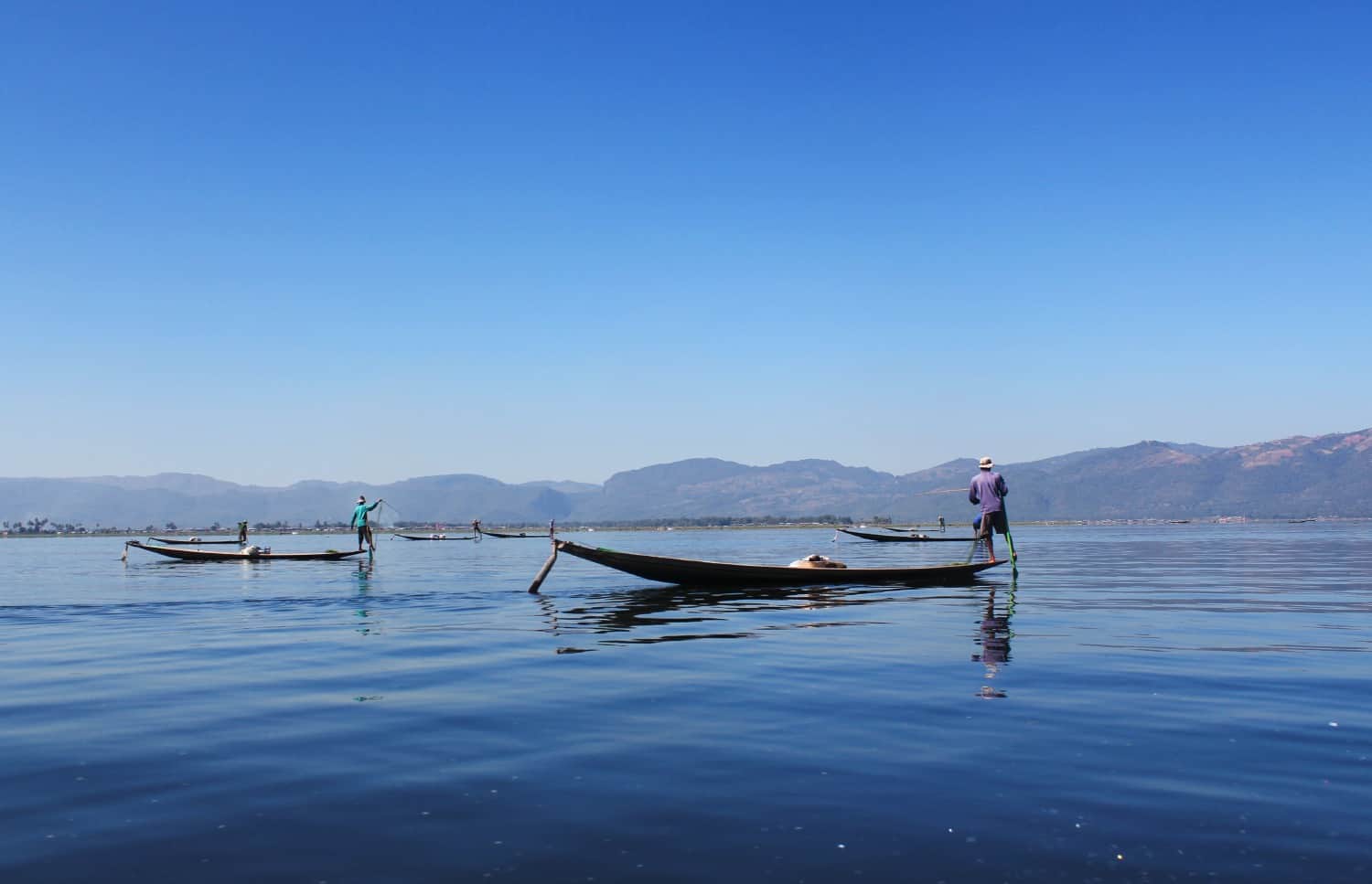 We cruised past tourists making the same journey as us and it felt a bit like a procession. Past dozens of fishermen who were actually fishing and not dancing for tourists. Past floating weeds and reeds, until we entered the stilt-house villages. 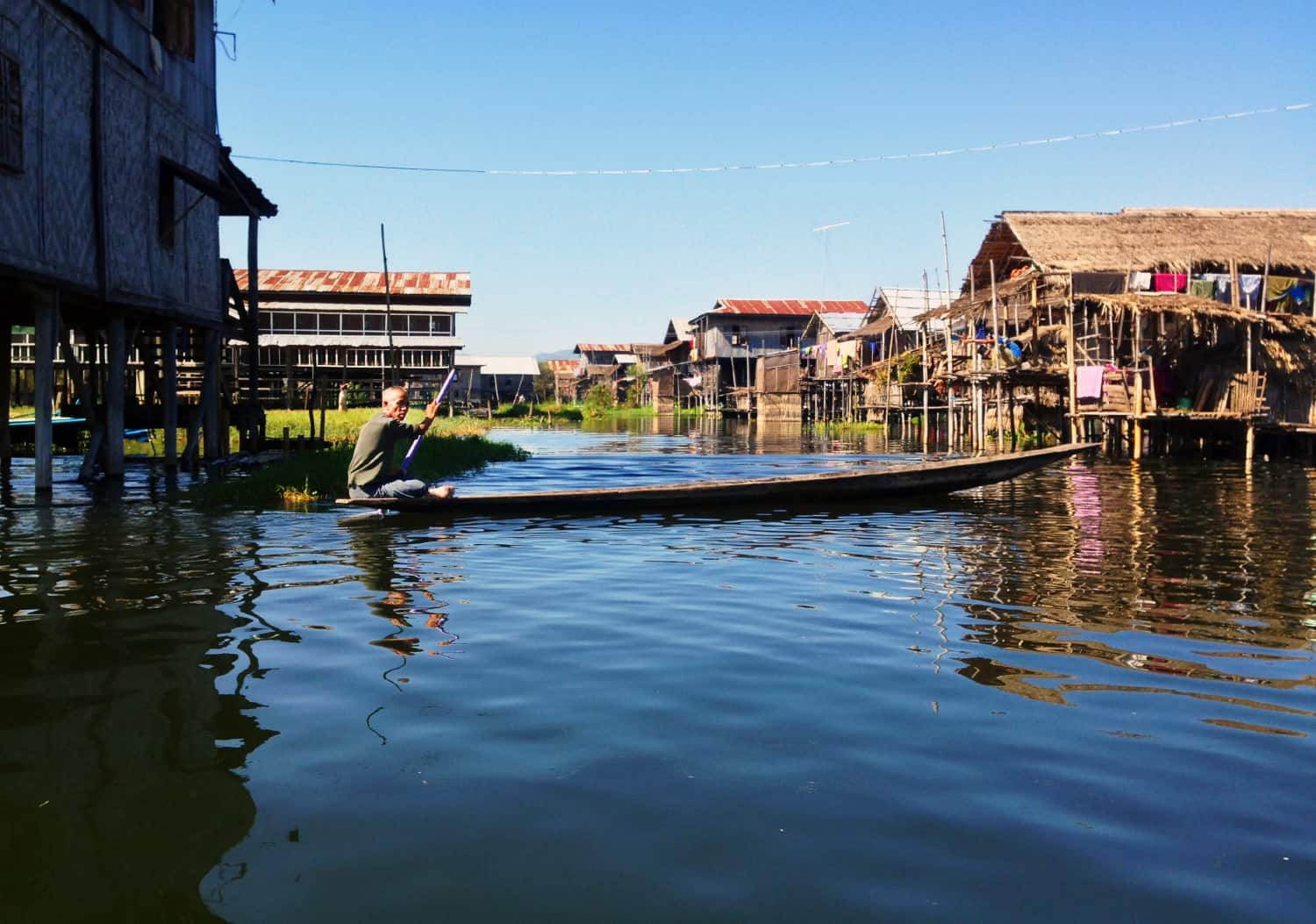 Then, we left the main lake behind and passed through a series of canals flanked by houses, shops, and schools, as well as the occasional pagoda. 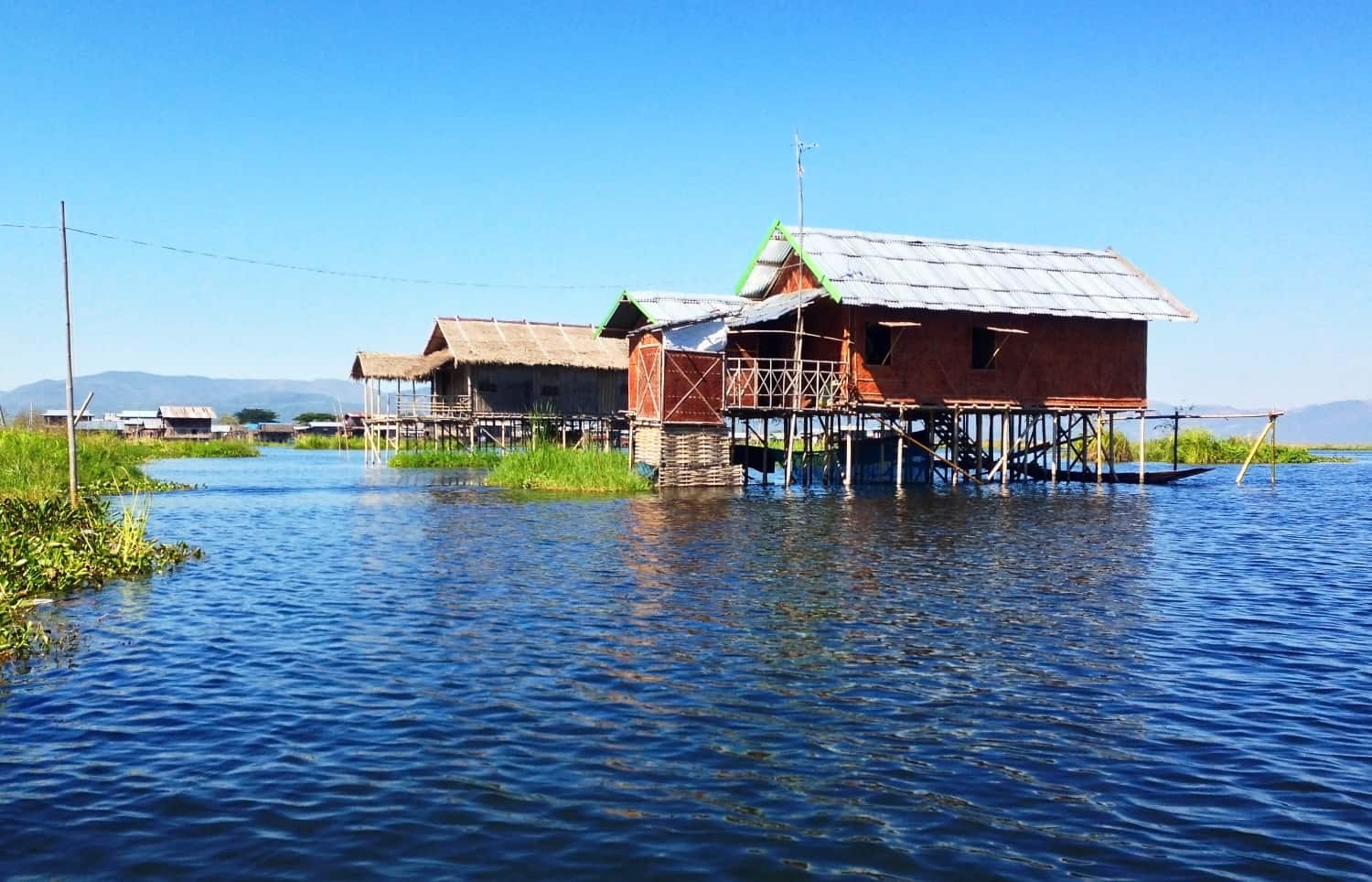 Our first stop was the lotus fibre weaving at Paw Khon, where we were greeted with a small glass of tea that tasted like mud. As I sipped at the foul-tasting liquid, our guide led us from room to room, first showing us how to remove the thread of the lotus plant, then letting us watch the women loom threads of lotus, silk, and cotton into intricate patterns.

There was no hard sell to buy their products and the weaving process was genuinely interesting. I was starting to rethink my stance on tours. 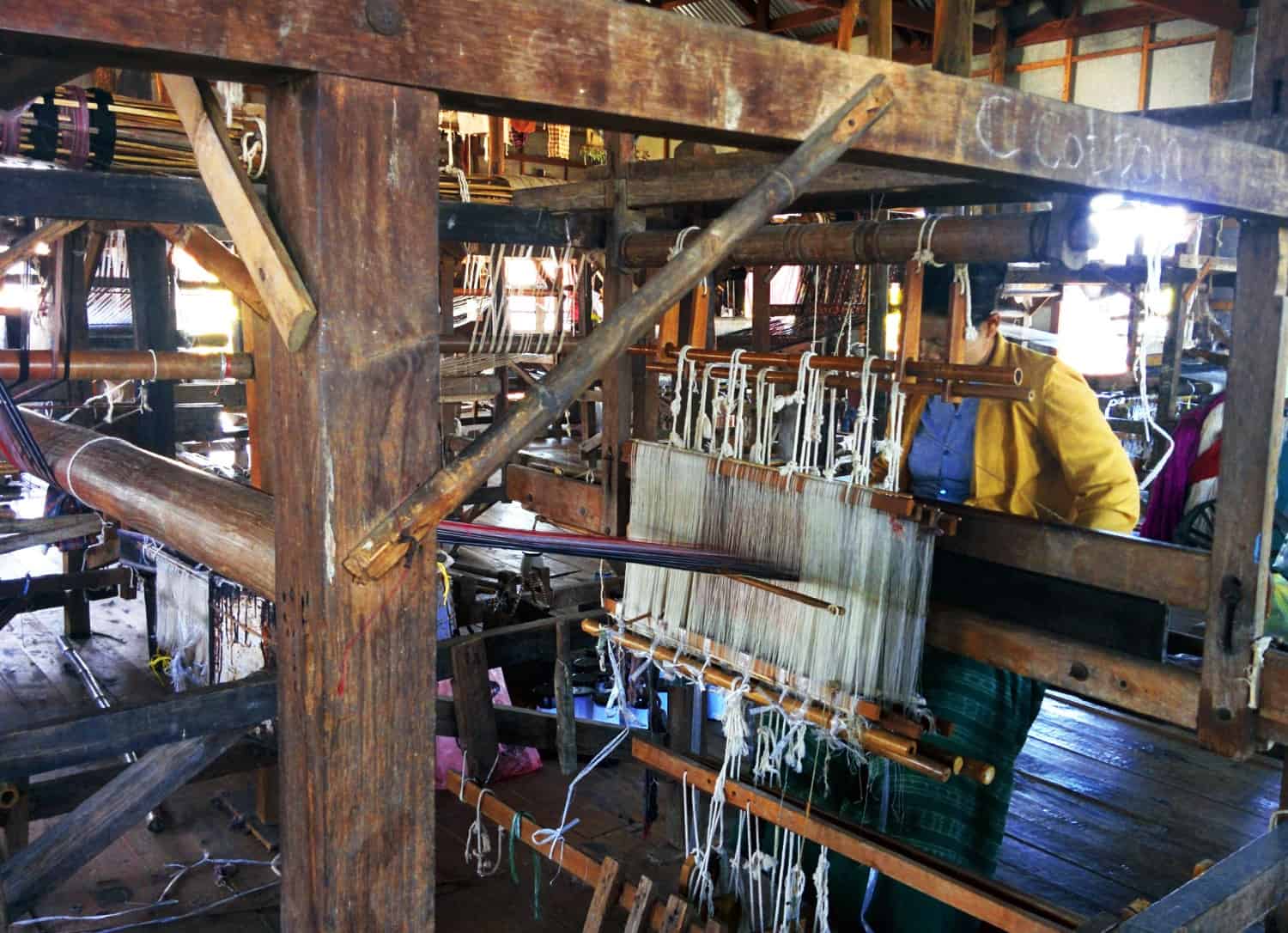 Next up was a silver making factory that was more like a jewellery store than any kind of workshop, and we quickly walked back out again.

Back on the water, we cruised under bridges and along narrow canals, the cool breeze and flat water providing the perfect atmosphere for our journey. 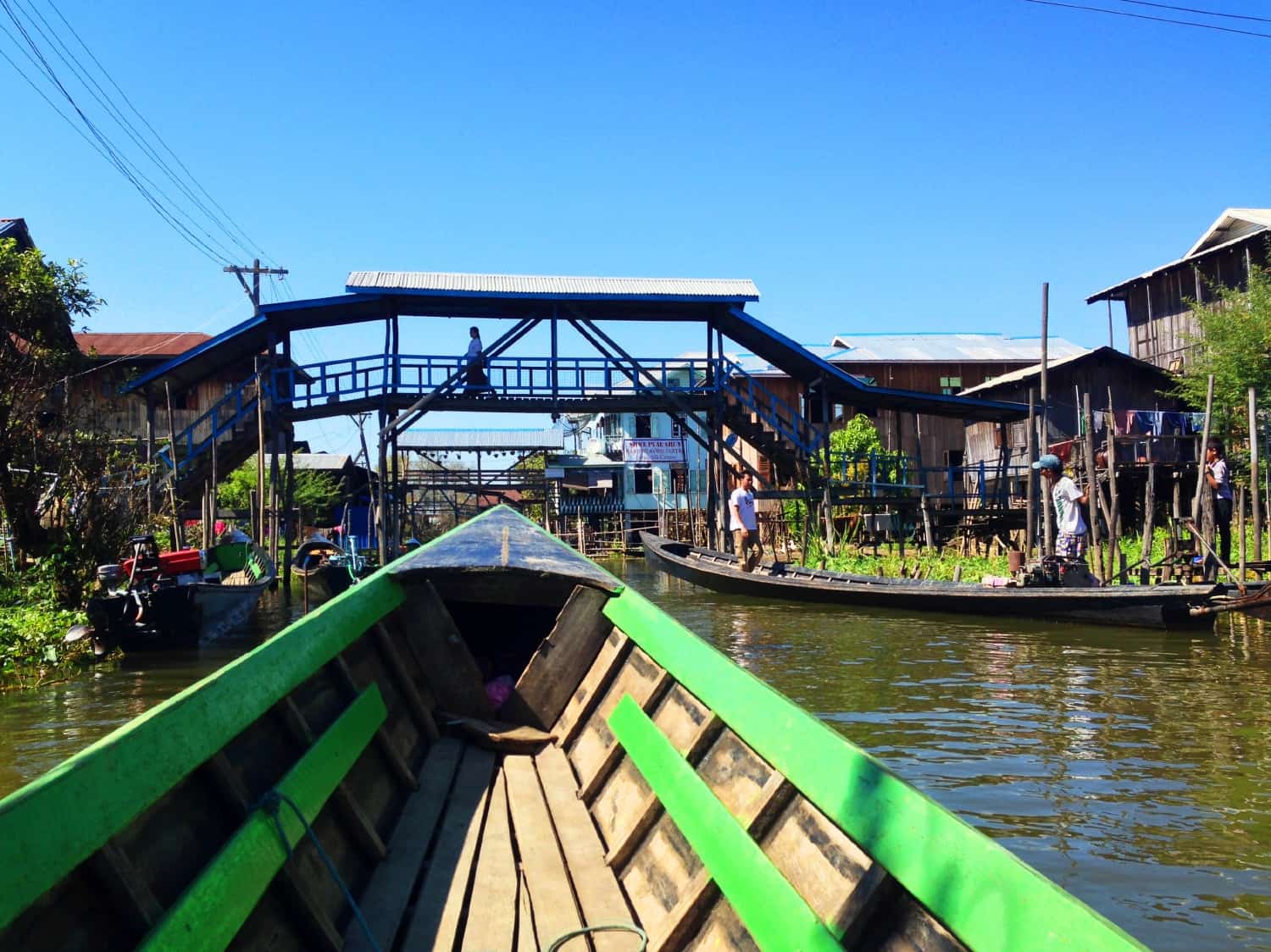 The Phaung Daw Oo Pagoda was up next, and as an ultimate travel fail, I was wearing a strap top and had brought nothing with me to cover my shoulders. While there were tourists wandering inside with similar attire, I didn’t want to run the risk of being disrespectful, so busied myself browsing the trinkets sold at the stalls outside instead. Even though I didn’t have a home to put them in. 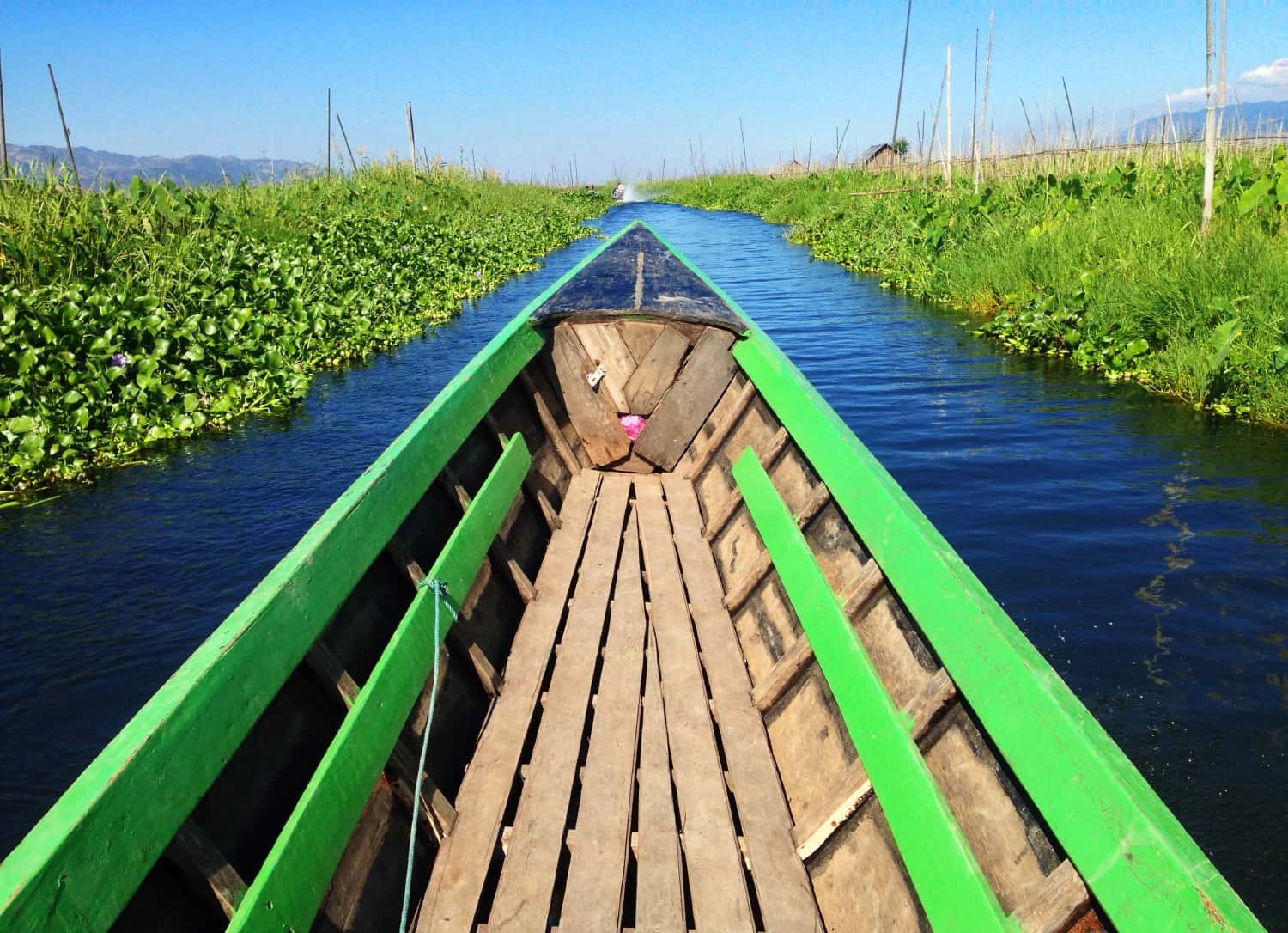 The highlight of my time on Inle Lake was the cheroot factory. I don’t know how you spent your teenage years, but mine were spent teetotal, filled with textbooks on quantum mechanics and frantic research on how to stop having panic attacks.

I’d never smoked before, but there I was, perched on a stool in the factory with a woman handing me a smouldering cheroot.

I declined her offer and instead watched Dave raise the small flavoured cigar to his lips and inhale.

Phwoar, I found myself thinking. Smoking is sexy!

“You sure you don’t want to try it?” he asked me from inside a cloud of smoke.

“What do I do with it?” I asked, taking it from him and thinking about how disappointed my parents would be. I felt like I was in a D.A.R.E commercial, but for the first time in my life I was thinking about saying yes.

“Just suck it,” he said with a shrug.

I took a gulp at the rose-flavoured smoke and broke into a coughing fit. When I looked back up again, I had an enormous grin plastered across my face.

“I love it!” I beamed, raising it back to my lips and inhaling a little more expertly this time around. “It’s delicious!”

Dave had to drag me away from the cheroot factory before I could buy their entire stock, and just like that, a new smoker was born.

Cheroots! I love them. 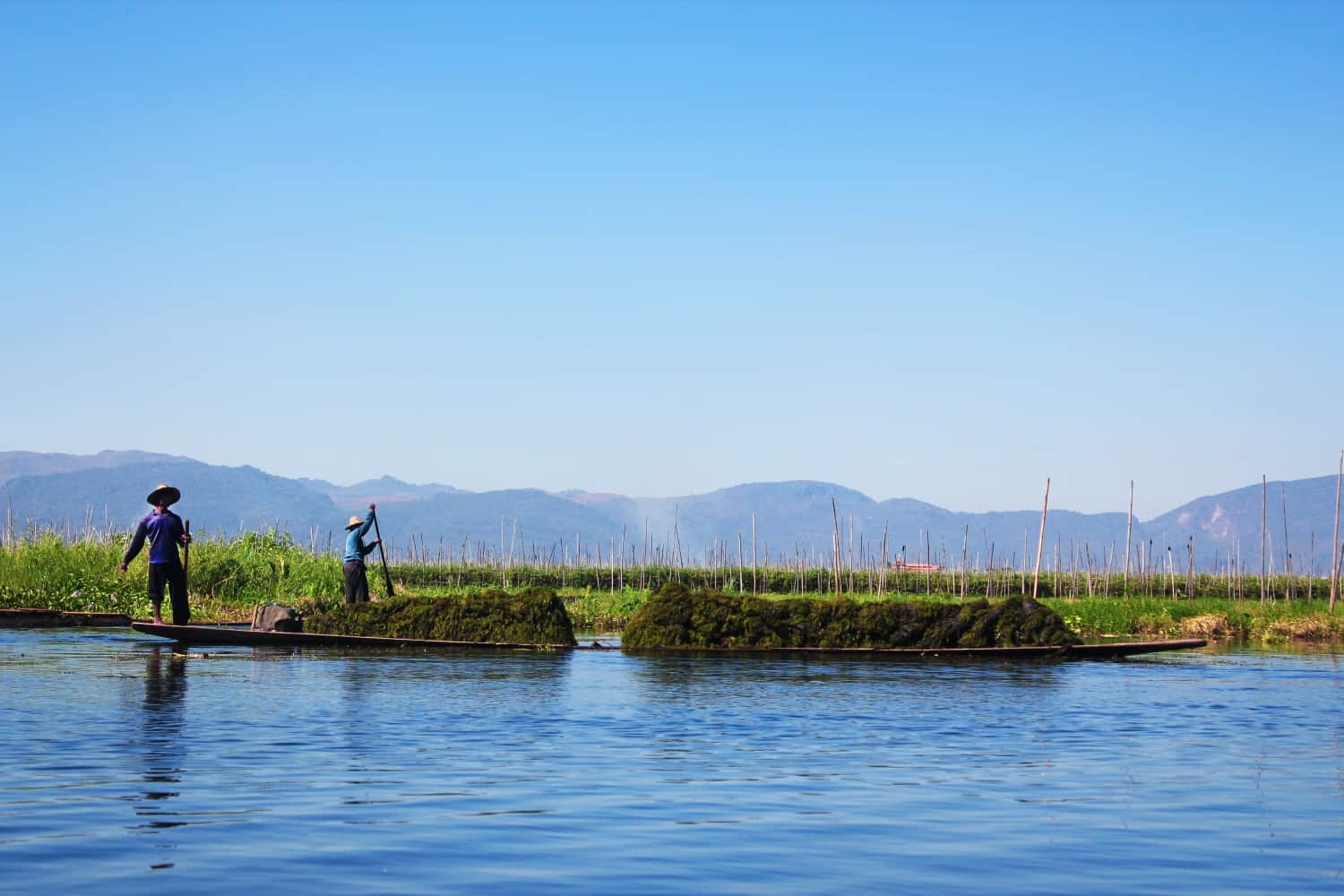 Our final stop was the Jumping Cat Monastery, famed for its, uh, jumping cats — except the cats no longer jump, so… it was just a fairly average pagoda.

And that was Inle Lake! I came to the water with lowered expectations and ended up having the perfect couple of days. The factories were, for the most part, interesting and without any hard sells, the sunset was beautiful despite the awkwardness, and cruising around the canals and villages ended up being surprisingly fun. I didn’t expect I’d end up saying this, but I’d definitely return.

And not just for the cheroots.

Does Inle Lake Sound Like a Place You’d Love or Hate? 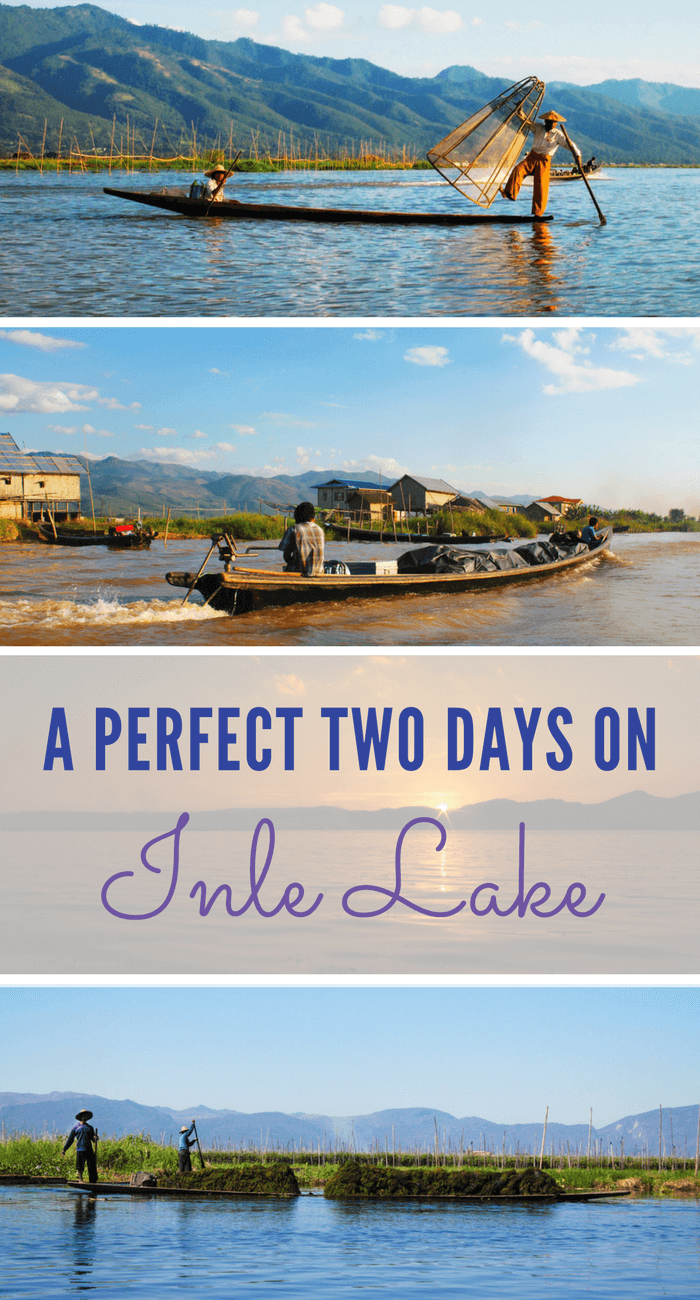 I Was Abandoned at the Burmese Border

I Lost My Passport Twice in Two Months

Why I Fell in Love With Myanmar

How to Spend Three Days in Tucson, Arizona

How to Spend Three Days in Eilat, Israel

The Cost of Travel in India: A Detailed Budget Breakdown