My slow boat journey to Luang Prabang can definitely be described as being less than amazing. I hadn’t been able to sleep for over 24 hours and then I found myself spending an entire day sitting next to a dead body.

So when we finally arrived in town, I was mentally and physically drained and I had decided I wanted to spend the next few days in an extremely fancy hotel. I needed to rest and recover and there was no way I was going to be able to do so in a 10 bed dorm room.

I needed some luxury travel in my life. 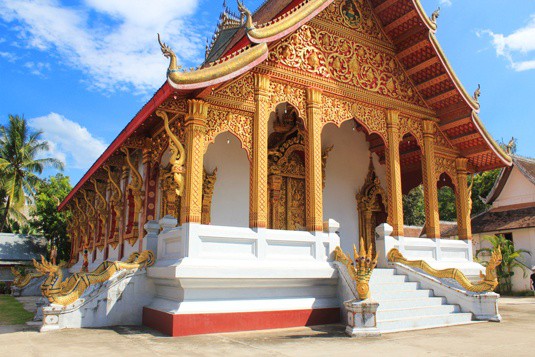 With this in mind, my friends and I made our first mistake when we stepped onto dry land and immediately decided to go with the first tout who met us off the boat. Big mistake.

These touts usually lead you to the crappiest and overpriced guesthouses in town. At the time we were unaware of this and just grateful to have found somewhere quickly and easily.

The guesthouse definitely wasn’t anything special but I splashed out on an incredibly overpriced room with air con and hot water to treat myself.

Or so I thought…

Returning back to my room after buying a bottle of water, I was confused to find that I could not get the door open. With visions of the last time I tried to force myself into an apartment and ended up snapping a key in half I was apprehensive about applying any kind of force to the lock. No, the safest thing to do would be to find the owner.

Except when I told him that I couldn’t get into my room, he started to chuckle loudly and pat me softly on the arm.

He had forgotten that the lock was broken and that nobody was meant to be staying there.

He had a few attempts at opening the door but remained unsuccessful and disappeared downstairs after just a few minutes.

Then he returned with his machete. 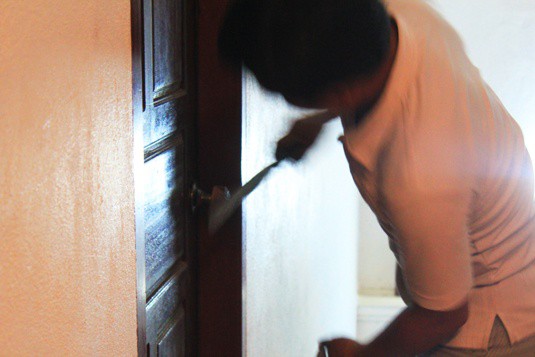 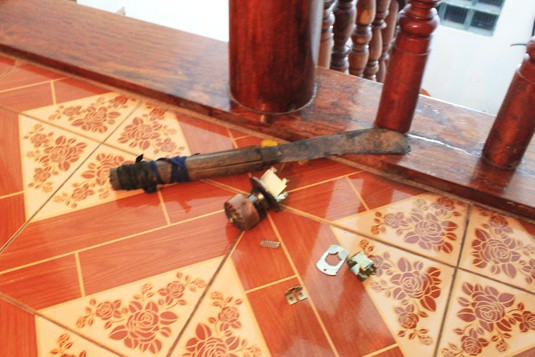 He got to work aggressively hacking away at the door while I sheltered at the other end of the corridor, alternating between taking sneaky photos and thinking about how ridiculous my life is.

“It’s ok – it’s very safe here”, he mumbled as I stared at him in frustration.

But I was too tired to argue, I needed sleep. I needed to forget about everything that had happened today. I pulled the door closed and anxiously tested the handle to see how easy it would be for anyone to get in.

I looked down in horror as the handle twisted uselessly in my hand.

I was now locked INSIDE my room.

You have got to be kidding me. 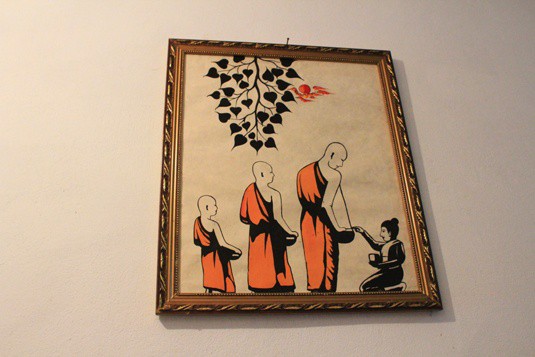 I shook the door as hard as I could, I banged until my fists were numb. I yelled and screamed and wailed for help. For over two hours I stood helplessly by the door. Two hours.

And then, finally, somebody heard my cries and was able to let me out.

I could not stay in this place any longer. I had to move. Within minutes my bags were packed and I was downstairs asking for a refund.

It was then that I found out that Luang Prabang has a curfew and that all other guesthouses would be closed at this time of night. The owner had gone home and I would not be able to get a refund until the morning.

I was stuck here.

Refusing to stay in my room, I was led outside to their “spare room”. One that had a perfectly functioning lock. And about 5000 cockroaches.

As I looked around the room, I bit down on my trembling lip, refusing to cry.

I can get through this – I’ve been through so much worse. It’s just one night. I know can do it.

I sat down weakly on the bed and immediately jumped up screaming when I saw an enormous cockroach run across my pillow. As my eyes anxiously scanned the room, I waited for them to adjust to the dim light. I noticed several more cockroaches crawling over the walls and floors. Running over my bag, towards my feet, on my bed. Mosquitos dived at me from every corner of the room. There were 7 cockroaches floating in the toilet. There was no air con, no windows.

Just me and the bugs.

I hate bugs, I really do, but I was not about to become a whiny traveler who couldn’t man up and handle being in a bad room. I was going to stick it out for the night, even though I was on the verge of a breakdown.

I was lying in the dark, wrapped up in damp, dirty, smelly blankets. There were cockroaches and other creatures crawling over my body, my arms, my face. There were strange noises that I didn’t recognise, the sound of wings near my face, banging on the door, creaking in the bathroom.

There is no way I can spend the night in this room.

I grabbed my laptop and ran. I would spend the night on the ground outside. 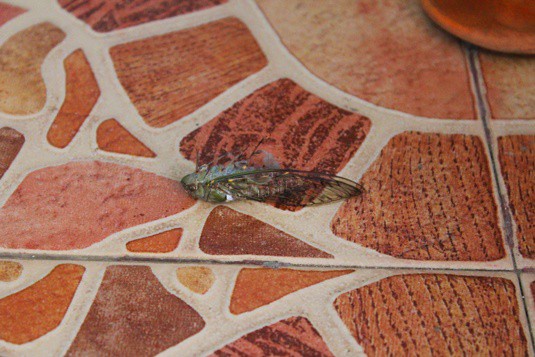 It was close to two in the morning when I was surprised by two Dutch guys creeping through the guesthouse gate. I think they were more surprised to see me lying on the ground crying. After chatting for a while and finding out they’d been at a late-night bowling alley while I had been locked out, locked in and attacked by cockroaches, the conversation dried up.

They refused to let me stay outside on my own for the entire night and insisted I stay in their room for the night. I was so exhausted, so drained, so desperate for sleep that I didn’t even bother trying to argue with them. It was only when I got to their room that I realised this felt oddly familiar.

Yes, I was now back in my old room.

The room that I cannot open from the inside.

I started to feel very nervous…

I refused to let any of the boys sleep on the floor as they offered and laid down, curled up next to the door. A few minutes later I was fast asleep although I didn’t stay sleeping for long…

I was absolutely horrified and disgusted to wake up and find one of the guys crouched over me with one hand on my chest and the other on my butt. 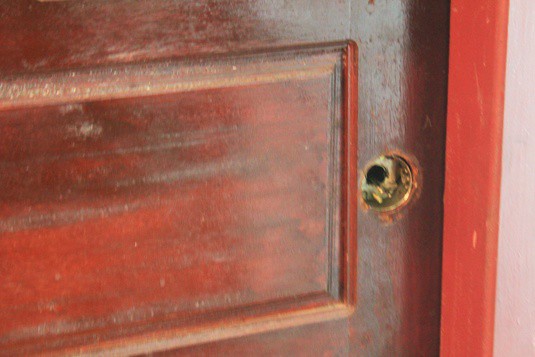 I could NOT believe it.

What type of person, after finding me crying on the ground, and after hearing about all that had just happened to me, would see this as an opportunity to take advantage of me?

I ran towards the door, trying not to break down in tears, only too aware that I wasn’t going to be able to leave. The second guy somehow managed to open the door with a credit card.

It was 3am. I wasn’t going to be getting any sleep that night.

The next few hours passed by in a blur: Sitting on the ground with my head on my knees trying not to cry, staring at stupid videos on Youtube, watching the clock, leaving terrible reviews about the hotel on TripAdvisor, forcing myself to stay awake (with no sleep the night before, I had managed to stay awake for over 50 hours straight!)

The owner arrived and I was surprised to see that he gave me a refund with no questions asked and I practically ran away from the place.

I’d spent a few hours searching online for amazing places to stay in Luang Prabang and Villa Champa is probably the most expensive place I’ve stayed in during my time in Asia. 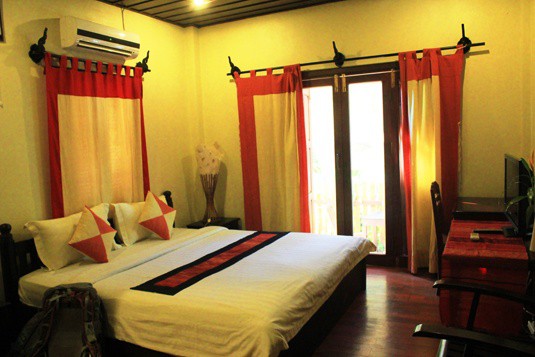 It was SO worth it!

I had a hot shower, ate an amazing cheese baguette and slept for 18 hours. I awoke energised, refreshed and ready to give Luang Prabang another go. Surprisingly, I loved the rest of my time there and I even left knowing that it was one of my favourite places in the world. But those first 24 hours?

I was seriously starting to believe I was cursed.

The Cost of Travel in Laos: A Detailed Budget Breakdown

Photos of Ridiculous Things on Bikes in Vietnam

28 Best Things to Do in Porto, Portugal

The Cost of Travel in China (2021): A Detailed Budget Breakdown

Learning to surf in Bali

A Thousand Golden Domes: The Churches of Kiev

A Solo Travel Fail in Durban