I can’t stop thinking about Maine.

From the moment I stepped foot in the Pine Tree state, I was smitten, and I still can’t believe it took me so long to get there. I’d go so far as to say it’s my new favourite state — I loved it that much!

From hiking Acadia National Park to sunbathing beside Portland Head Lighthouse; eating every whoopie pie in sight to befriending bigfoot at the Cryptozoology Museum; cruising alongside hundreds of miles of spectacular coastline to snacking on blueberries: Maine ticked every single box for me when it comes to falling in love with a destination. I can’t wait to start writing about what a wonderful place it is.

Up first: a rundown of why, exactly, it captured my heart.

Acadia National Park is Everything

The highlight from my time in Maine was undoubtedly Acadia National Park.

Heading to a destination with sky-high expectations is usually a recipe for disappointment when it comes to me, but in Acadia, I was in awe of everything. The wealth of hiking trails, the beautiful beaches, the calm ocean, the towering mountains, the spectacular views from the summits of them. And to top it all off, we had a small amount of fall foliage reaching up through the sea of green.

Within minutes of arriving at our Airbnb, the owner was telling us that every guest who stays for just a couple of nights ends up wishing they’d booked for longer, to which Dave and I solemnly nodded, having already decided during the drive in that we should have given ourselves longer.

In fact, if the rest of our road trip hadn’t been booked solid, we would have thrown our plans to the wind and remained in Maine for the next two weeks.

As everyone could have predicted, our two days in the park were nowhere near enough, and we’re already talking about how we could spend several weeks just hiking the different trails upon our return. I have a huge post on Acadia National Park coming up next where I’ll be sharing all the juicy, beautiful details of our time in walking paradise.

I knew I wanted to live solely on two different dishes while road tripping through New England: lobster rolls and clam chowder.

And it’s time for a confession: I don’t think I’d ever actually tried lobster before arriving in New England! But luckily for me, I chose the best region of the world to tuck in to these tasty crustaceans, which is exactly what I did many, many times during our road trip.

Maine lobsters, in particular, are melt-in-your-mouth delicious, and inexpensive, too. They’re fresh, tender, buttery, and, if you eat seafood, something you need to add to your food bucket list. SO GOOD. My greatest regret from our time in Maine was not having some at least once a day. 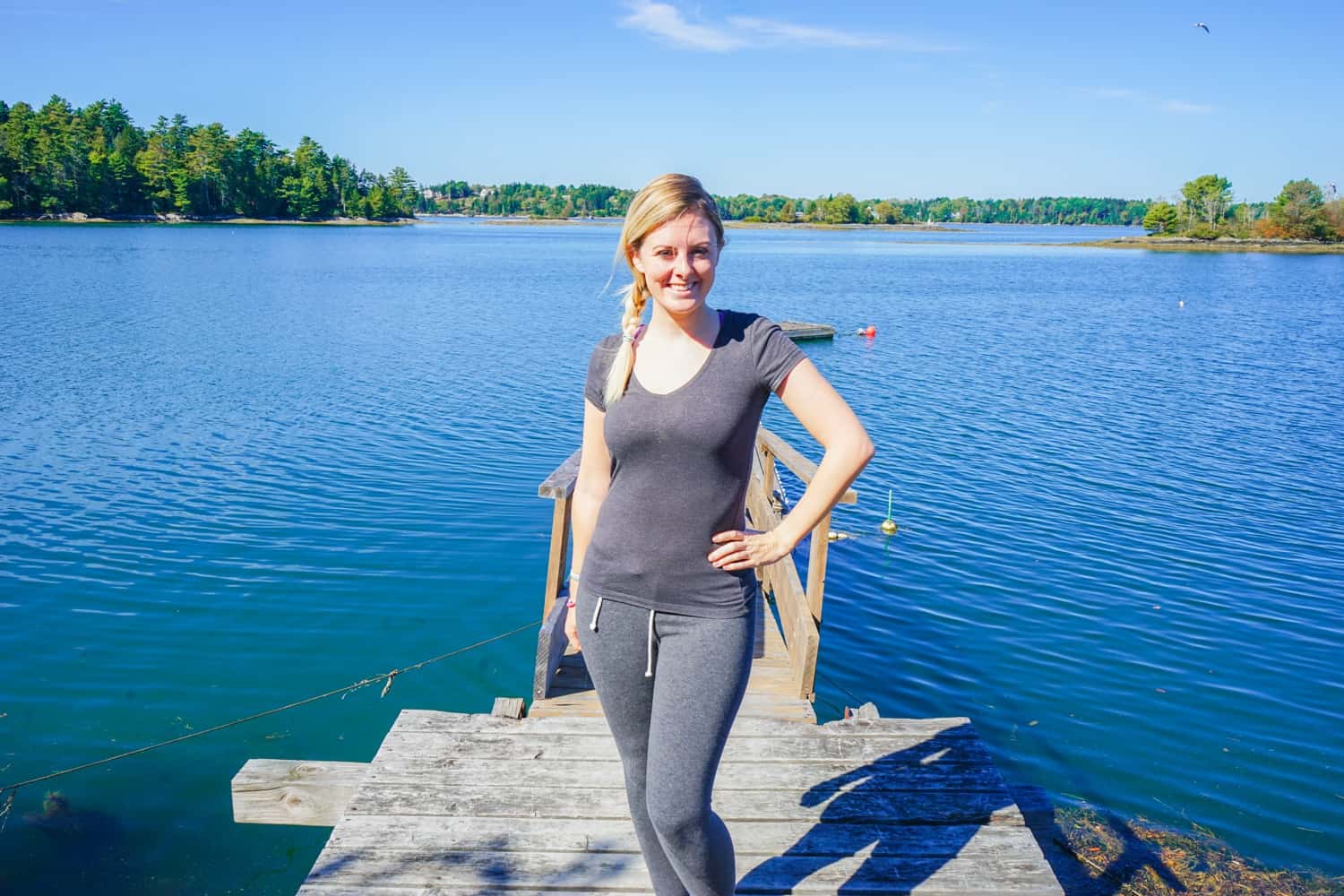 You Could Island-Hop Forever

I allocated just one day of our Maine road trip to driving up the coast from Portland to Acadia, and that error is the primary reason why I’m already planning to return.

Maine has over 3,000 islands scattered along its coastline, and after visiting just two of them, I’m already certain it would be worth checking out a dozen more.

Bailey Island was one of our first stops on our coastal cruise northwards, and one that instantly revealed itself to be one of the most peaceful spots in the U.S. I spent an hour wandering around the trails, dipping my toes in the cold, calm ocean, and pondering whether I could live somewhere so isolated, because the pastel-coloured cottages there were beautiful.

By the time we were hitting the road again, we were already running out of time to explore much more of the coast, which resulted in me promising not to pass through so quickly next time. There’s simply too much to see to do that drive in a single day.

There Are Some Seriously Cute Towns and Villages

I thought a trip to Maine would be all about getting up close to the water, but once I stepped away from the ocean, I found so many adorable towns that I wish I could have stopped at them all.

Bath (pictured above) was a major hit for me when we dropped in for a delicious sandwich and pumpkin soda to enjoy in the sunshine alongside the river.

Wiscasset was another highlight, one that claims to be “the prettiest little village in Maine”, and if I’d ignored the literal miles of backed-up traffic queueing for the Wiscasset Bridge, I’d have to agree. Regardless of the village’s strange and infuriating traffic issues, it was well worth parking the car to meander past the historic homes and mansions, snap photos of the fall foliage, and queue for an hour for a lobster roll from Red’s Eats. Just kidding — time was short and surely the rolls couldn’t be that good?

Whoopie Pies, Guys, and Blueberry Everything

I’d never even heard of a whoopie pie before I arrived in Maine, but once I tasted my first — a pumpkin flavoured one — I was sold for life and couldn’t stop ordering them. A whoopie pie, as I understand it, is essentially a giant Oreo, except the biscuits are more like mini cakes and the filling is softer and creamier.

Oh, and speaking of blueberry, Maine also has some of the best blueberries I’ve ever tasted, and they were for sale everywhere. A couple of the highlights included the local blueberry-flavoured ale that came with actual blueberries in the bottle and the blueberry mojito at Beal’s, close to Acadia National Park. Okay, so we mostly drank our blueberries, but they were fabulous nonetheless.

And yes, I was obsessed with the food in Maine.

I really enjoyed my time in Portland, and ate exceptionally well while I was in town.

I’d always expected that just one visit to this city would be all it took to declare it my favourite in the US, but I didn’t have quite enough time there to fall that hard for it on this trip. It was one of those situations where I felt as though had I had several weeks to spend in town, I’d have come away enthralled, but as I only had a couple of days and there aren’t too many touristy things to do in the city, I couldn’t get as much of a feel for it as I would have liked.

But it’s a cool city! It’s got the right amount of unusual — hi, Cryptozoology Museum — blended with green spaces, fantastic food, and weird hipster things. It was in Portland that I discovered a restaurant that has a map of Maine on the wall, showing exactly where they source every single item on their menu, from the salt to the lettuce. You can’t get more hipster than that.

Who knew I had an obsession with lighthouses?

I didn’t until I arrived in Maine and found myself going out of my way to visit as many as possible as we drove alongside the coast.

One of my favourites was the most visited one in the state; the famous Portland Head Lighthouse, where I spent a peaceful afternoon hiking nature trails, reading a book beside the ocean, and yacht-spotting from the water’s edge.

If this is what it’s like to live in Portland, I’m ready to pack my bags and buy a one-way ticket.

Maine is Perfect for Road Trips

I visited all six states of New England on this road trip, and my two favourites to drive through were Maine and New Hampshire.

There’s so many cute towns to wander around — seriously, I begged Dave to stop every ten minutes — the roads are reasonably quiet, especially once you get off highway 1, and the passing scenery is breathtaking. And if you love being beside the water, you’ll be convinced to visit when you learn Maine has more coastline that California!

I couldn’t believe how many beautiful viewpoints there were to stop off at, how every twenty seconds I spotted a house I wanted to live in, and how there were so few tourists outside of the main destination hotspots.

I’ve road tripped in 12 states now, and I have to say that Maine easily ranks first in my books. It has that winning combination of natural beauty, lots of things to see, pretty houses, fresh air, an outdoorsy vibe, and stress-free driving.

I Can See Myself Spending a Lot of Time in Maine

Can you tell I’m all about that Maine life now?

Already, I’ve talked my parents into taking a road trip there in 2019, informed Dave we’ll be returning for a longer trip next year, and looked into how to score American residency.

Maine: I love you and I can’t wait to return.

Which is your favourite state in the US?

19 Wonderful Things to Do in Philadelphia

25 Incredible Things to Do in Hawaii

How to Spend Three Days in San Francisco

How to Spend Three Days in Boston: A 2022 Itinerary

22 Epic Things to Do in Seoul, South Korea

I Went To Roswell And Everything Was Ridiculous

How to Spend Two Weeks in Morocco: An Itinerary for First-Time Visitors