I felt safe in Sri Lanka until I travelled alone.

With Dave, I would gush non-stop about the friendly locals who were so delighted to see us in their country. I lost count of the number of times we were approached and asked why were in Sri Lanka, where we were heading, and what we loved most about the country. A highlight: when Dave mentioned to our tuktuk driver that he’d always wanted to drive one, he excitedly showed him how it worked, and then pulled over and offered to let Dave drive him and I around Mirissa!

When wandered alone, though, the mood changed. It wasn’t that anyone did anything — nobody touched me or said more than hello — but it felt like every local man I passed stared at me in an unsettling way. It made me so uncomfortable that I resigned myself to exploring solely with Dave. I felt nervous without him.

On my final day in the country, there was no escaping solo travel: Dave had plans to explore Central Sri Lanka for the next two weeks and I was flying back to the UK to surprise my mum for her birthday. I had 24 hours to get from Galle to Negombo, and then on to the airport the following morning.

The journey was more complicated than it should have been, especially as I was trying to maximise my Dave Time and didn’t want to leave Galle until later. Buses were complicated, and so crowded that I didn’t want to battle with them with my bags. Trains would be fine — catch one to Colombo, one to Negombo, and taxi to my guesthouse — but I’d been to Negombo train station before and it had been deserted. I really didn’t want to be wandering around at 10 p.m. trying to find a taxi. (Note! Dave just told me the train station I was thinking of wasn’t actually Negombo train station, which is actually quite busy so, uh, I guess I’m stupid.)

It didn’t help that I read over and over about how women shouldn’t venture out alone at night in Colombo — or even hang out at bus/train stations — I rolled my eyes at their fear mongering, and decided to train it anyway. It’d be fine, I told myself.

I said goodbye to Dave, switched off all technology so I couldn’t be traceable — the last thing I wanted was for someone to see some kind of social media update tagging me in London before I got to surprise my mum. As always, my tears dried ten minutes afterwards and I remembered how much I love solo travel. And how much I love the trains in Sri Lanka 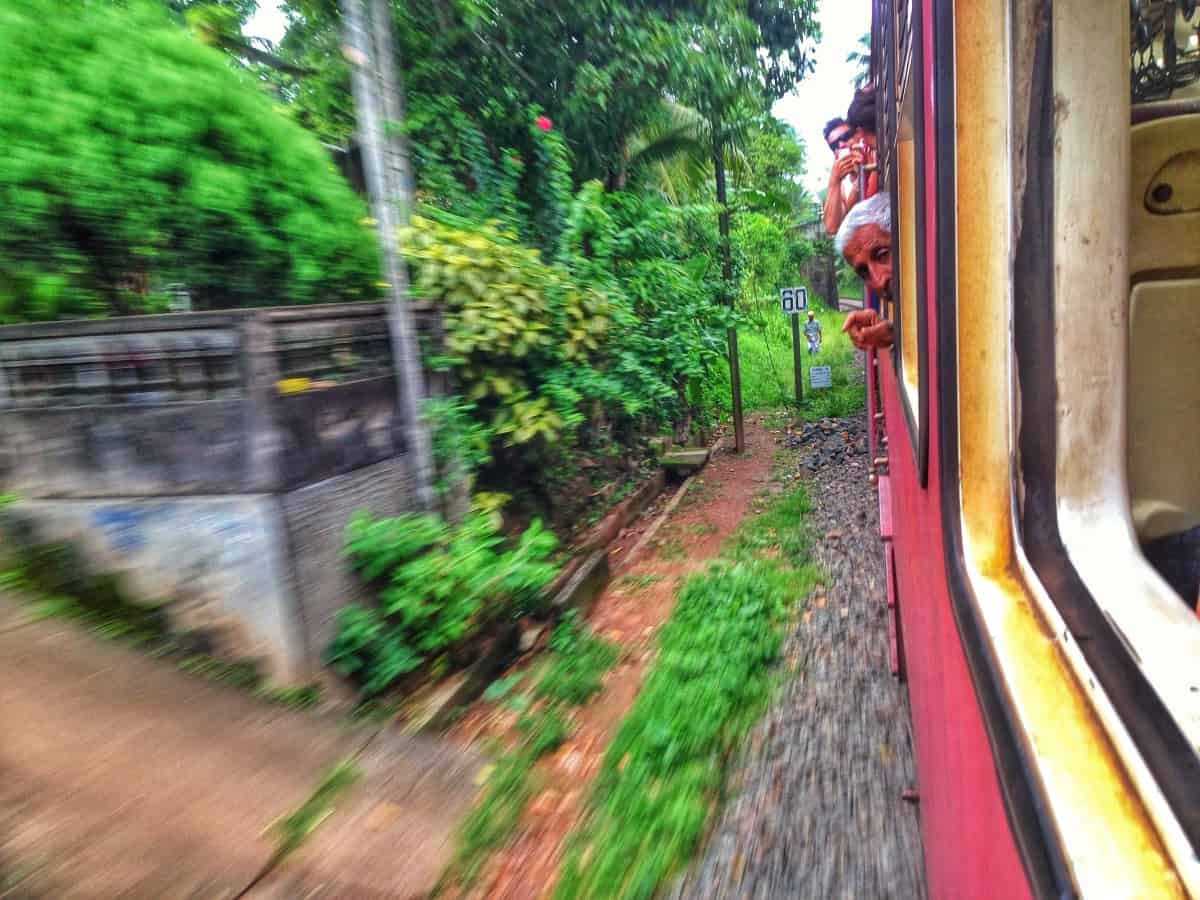 It was at the first stop when I watched in bewilderment as a crowd of local teenagers began to gather on the platform beside me. I stared at my feet for a minute and looked up, only to see a dozen guys staring at me with intense, chocolate-coloured eyes. I felt like I was in a zoo.

I wasn’t sure what to do so I squatted down in front of my seat until we started moving again. Because that didn’t make me look crazy…

It kept happening: the guy sat across the aisle watched me for much of the journey; men would pile onto the train and then stop in their tracks when they spotted me, the lone foreigner in the carriage; and even the guy sat in front kept turning around and peering through the gap in the seats at me.

It was creeping me out, especially because of all the silly articles I’d read that morning. Maybe there was some truth to them after all? I shook my head and reminded myself that nobody was doing anything to me. I was just being overly paranoid.

Darkness fell and we arrived in Colombo.

I had two options: wait alone in stare-ridden Colombo Fort train station for an hour, hope I could hunt down a taxi, and get to my guesthouse, or leave Colombo Fort and grab a taxi now.

I threw up my hands and walked outside. I couldn’t put a price on my safety. It was dark, I was nervous, and I just wanted to get to Negombo.

“Tuktuk?” A guy jumped into my path from the shadows.

“Maybe,” I said. I pulled out my phone and held it out to him. On the screen was the address of my guesthouse. “How much to go here?”

I groaned, and walked away. He didn’t call me back so I knew he wasn’t going to budge on price. What should I do?

“I am going to my house,” the tuktuk driver shouted at me, ten minutes later.

“What?” I shouted back, and the wind whipped a gust of hair into my mouth.

Alarm bells rang in my head. I’d spooked myself out from all the staring and now this guy was going to drive me to his house? I was certain it was innocent but that was how I’d ended up scammed and assaulted in the past. I couldn’t take the risk.

“Is too far for tuktuk.”

“Then why did you agree to take me?”

I coughed into my scarf as I inhaled a cloud of dust. We swerved onto a pot-holed highway that was clogged with traffic and began to career from side to side so violently that I was convinced we were going to topple over.

We stopped by the side of the road and I watched the driver walk into a store. He came out with a packet of cigarettes.

I shook my head.

He lit up, climbed back inside, and began to drive with one hand.

After an hour of white-knuckle riding, we stopped again.

“Negombo,” the driver said, turning around and holding out his hand to me.

I peered into the darkness. “This is my hotel?” I asked.

Few things ever make me lose my temper but being taken advantage of really makes me see red.

“Are you kidding me?” I snapped. “No way. I showed you the address of my hotel. You knew where I wanted to go. You looked at the address and said yes.”

“I’m not getting out,” I said, leaning back and crossing my arms. “Take me to my hotel like we agreed.”

“I’m not paying it,” I spat, baring my teeth in what I hoped was an intimidating way.

“Come on, man,” I snapped. “You know that me paying 3000 is a massive rip-off anyway. I’m not paying.” I waved the guesthouse address in his face. “Take me to my hotel.”

He shook his head and turned down a dark and empty road.

Damn it. I was about to be murdered. 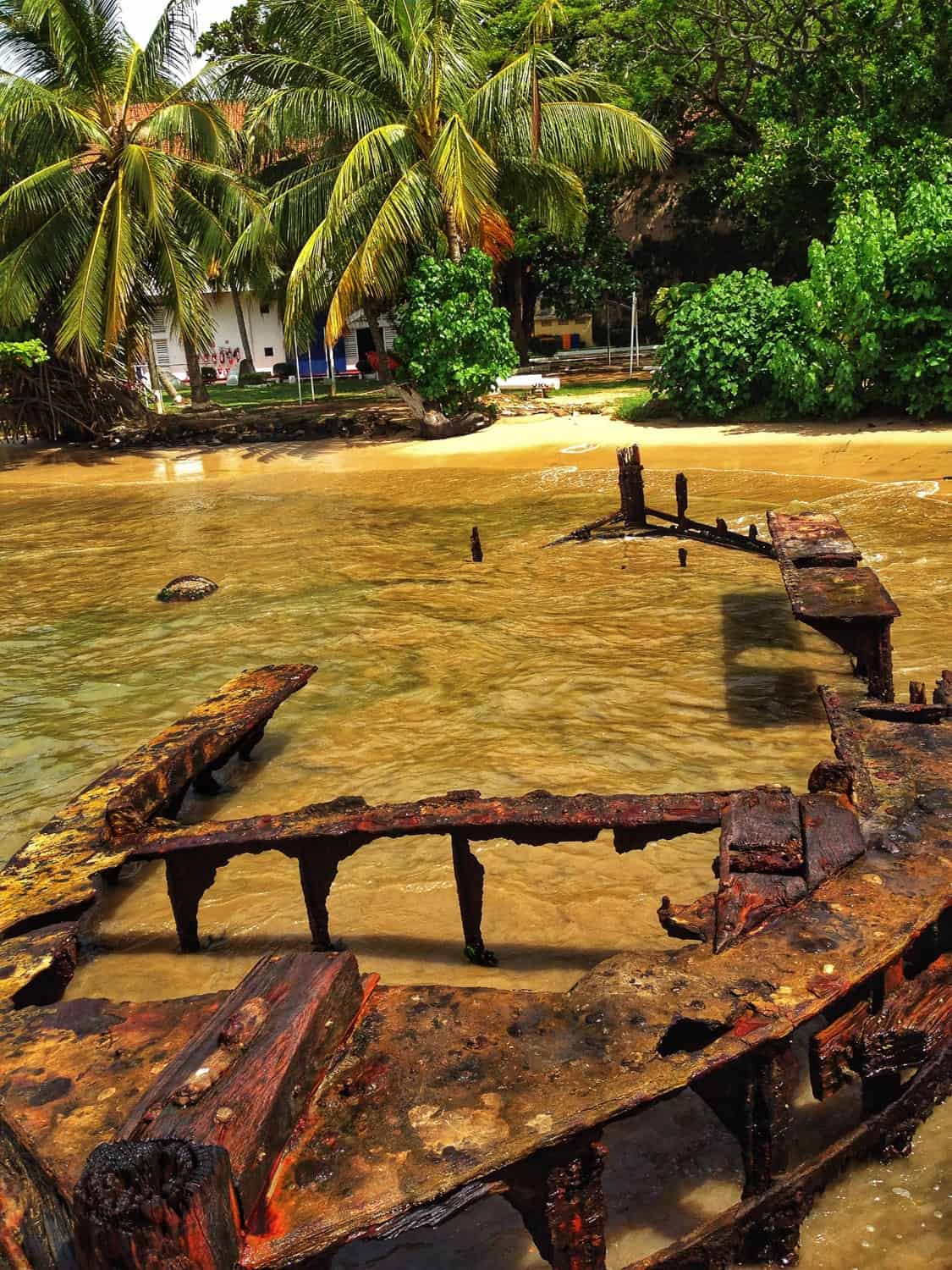 “Where is hotel?” he shouted half an hour later.

I pulled out my phone again. “Yeah, Negombo,” I said, leaning forward and showing him the screen.

He pulled over, and began calling to a group of men. He tried to pull my phone from my hand. I shook my head. “No way.” I kept it clenched in my sweaty fist and held it out to them.

We took off again, hurtling down the main strip of Negombo. I heaved a sigh of relief to see signs of life after a tense half an hour spent hurtling down dark roads. He couldn’t attack me in front of all these people.

“You agreed to this! I showed you the address.”

He muttered something under his breath and swerved down a narrow alleyway to the right. There was nothing that I could see. No lights, no cars — only darkened buildings. Now I was going to be murdered.

He braked and turned off the engine and I let the silence hang between us.

“Hotel,” he said, pointing to the left.

I looked out. “Oh yes,” I said, waves of relief washing over me.

I climed out of the tuktuk and dragged my bags behind me. “3000,” I reminded him.

I took out a 5000 rupee note from my purse and held it out. He quickly pocketed it and my eyes met his for a few tantalising seconds. I stood and watched, slack-jawed, as he started the engine and roared off down the road, 5000 rupees in his pocket.

“Motherfucker!” I muttered beneath my breath.

Cost of Travel in Sri Lanka: A 2021 Budget Breakdown

Pamukkale: One of the Strangest Landscapes on Earth

The Cost of Travel in Mexico: A Detailed Budget Breakdown