Long-time readers of Never Ending Footsteps will already know I have an obsession with themed restaurants. I love them! You’ll also know that every time I visit Taipei, I make it my mission to visit as many as possible. Taiwan is the land of themed restaurants! There are dozens of them to explore 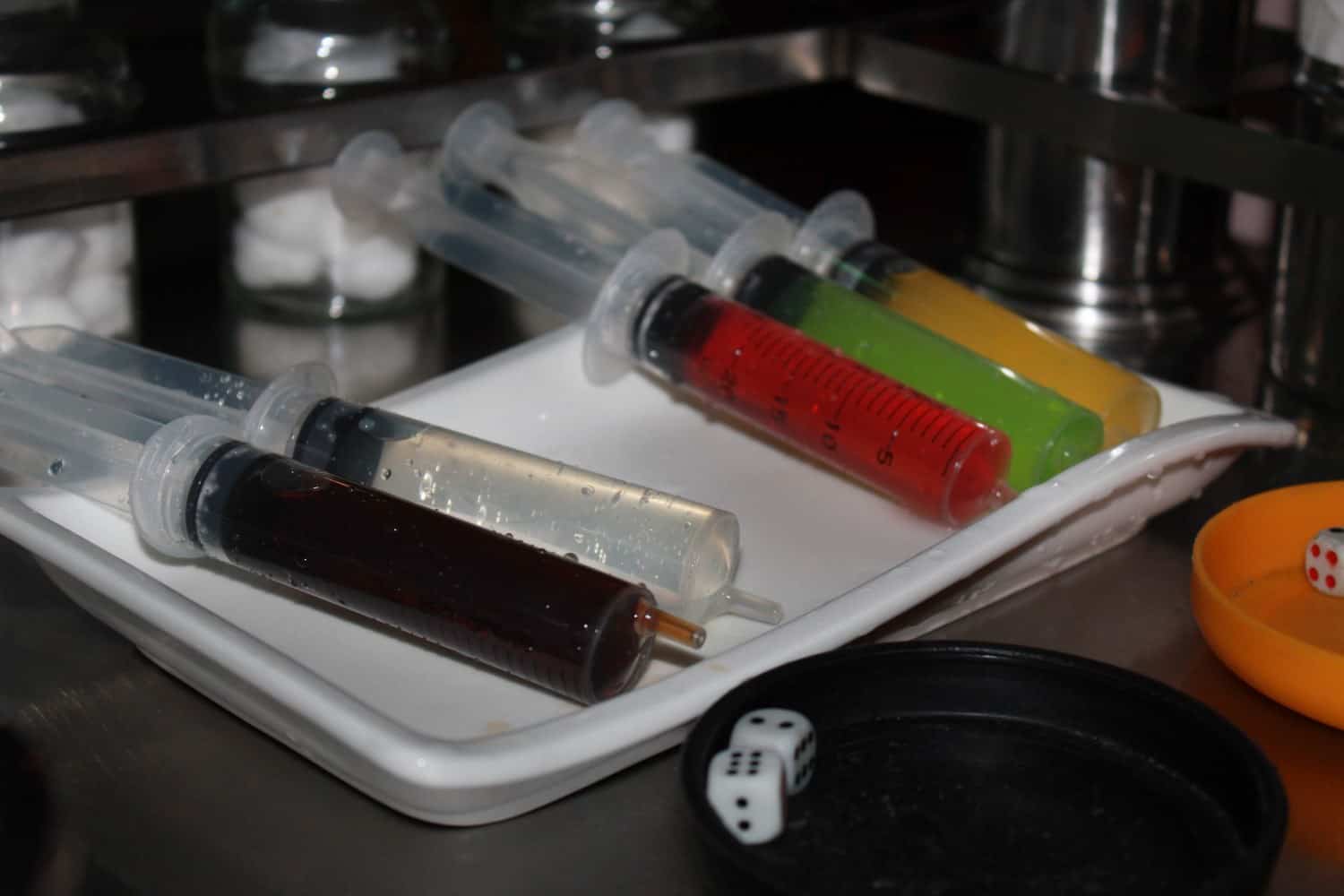 So what is it about themed restaurants that draws me to them?

They’re fun and quirky: Let’s face it, there are only so many temples and museums you can visit before you start to feel a little fatigued. Themed restaurants are weird. They’re fun and different and offer an experience you’re unlikely to find anywhere else in the world.

They’re rarely tourist attractions: For some reason, in Taiwan at least, I rarely spot tourists at the themed restaurants. It’s always giggling local schoolgirls and families and awkward looking dates. I’m usually the only Westerner there.

They leave you with hilarious photos: Because a photo of you standing next to a wedding dress made entirely from condoms will always be funny.

Most of the time you’ll have no idea what’s going on: At the hospital-themed restaurant, our meal ended with a game where, if you rolled a dice and got an odd number,  you’d have to have a syringe full of soy sauce and vinegar squirted on your tongue! I, of course, rolled an old number. 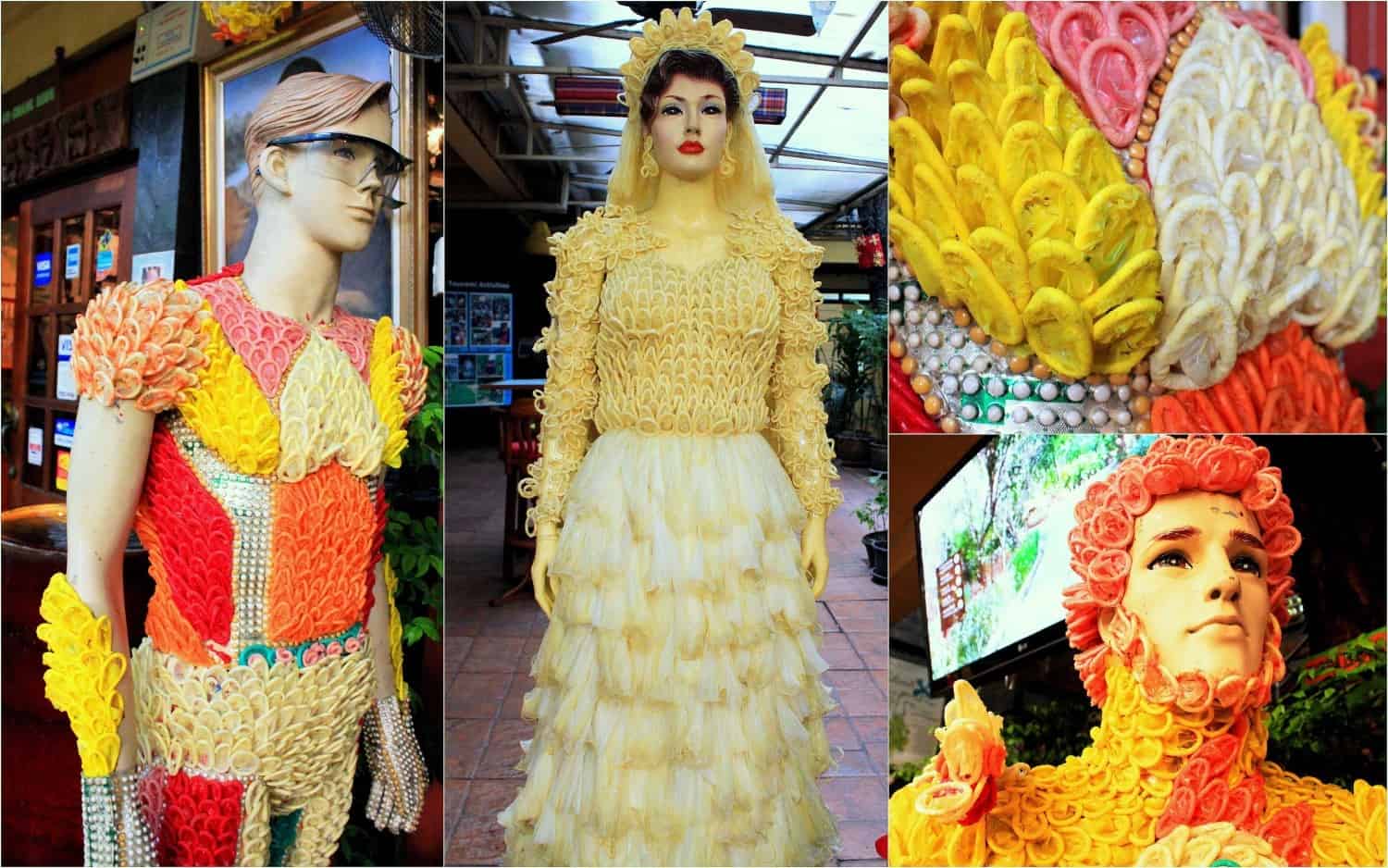 When I found myself back in Taipei, I was determined to cross another few themed restaurants off my list, but it was going to be a tough, tough sell to Dave, because Taiwanese food is amazing.

After a little research, I set my heart on the Barbie Cafe. I knew it was going to be near-impossible to convince Dave to come with me. He wouldn’t want to waste a meal on eating bright pink burgers that tasted like cream soda.

“Will you come to a themed restaurant with me?” I asked Dave, mentally preparing a list of arguments as to why we needed to go.

“There’s one just down the road from us,” I continued. “Want to head there today?”

Ten minutes later, we were stood in a queue of tiny children inside a bright pink restaurant, and Dave was staring at me as if was insane. 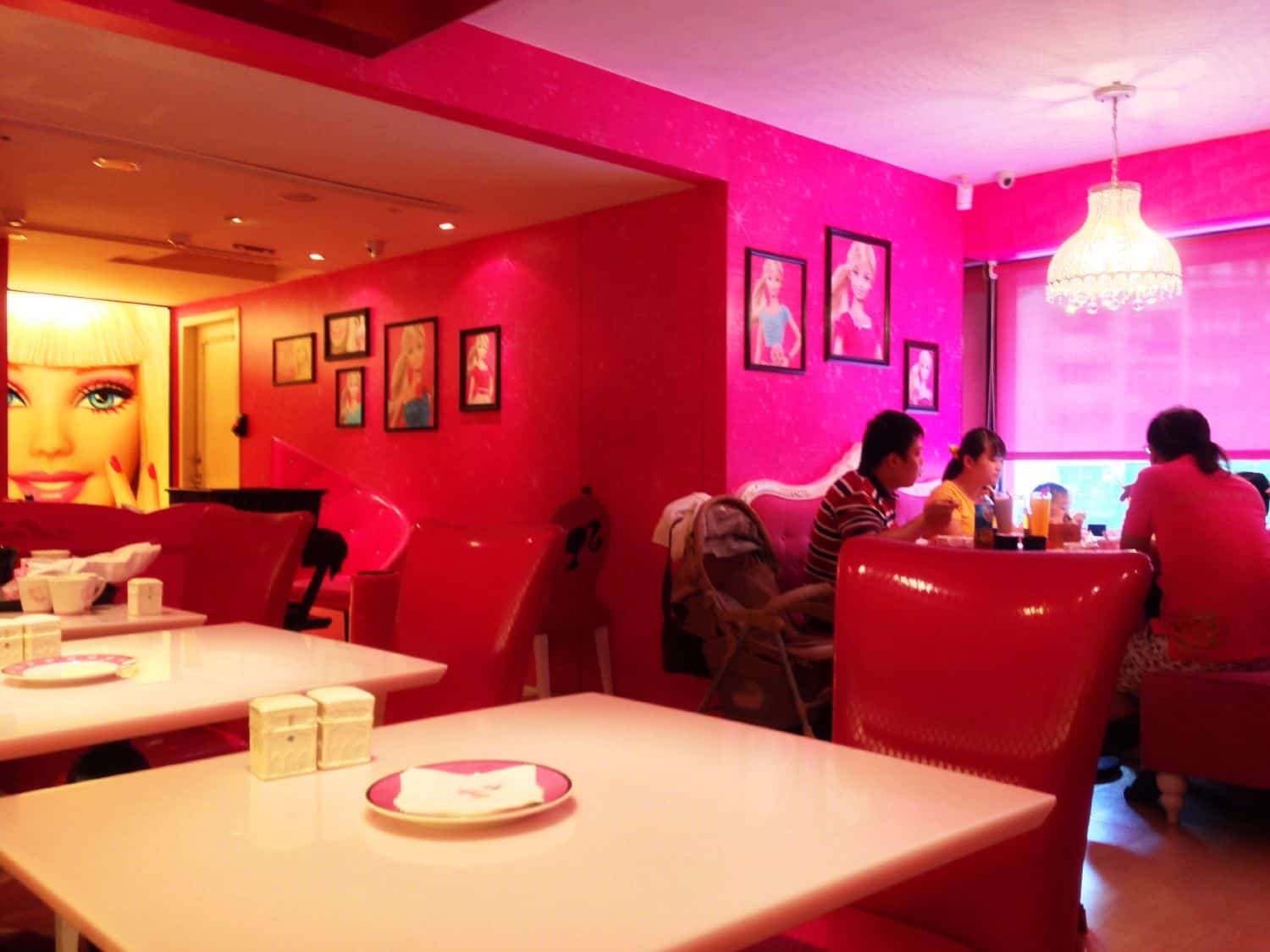 You can’t make me feel inferior without my permission! I chanted in my head as I tried to convey an air of confidence over being in a place that was clearly designed for kids. A small child in the queue gaped up at us in bewilderment. I felt uncomfortable. 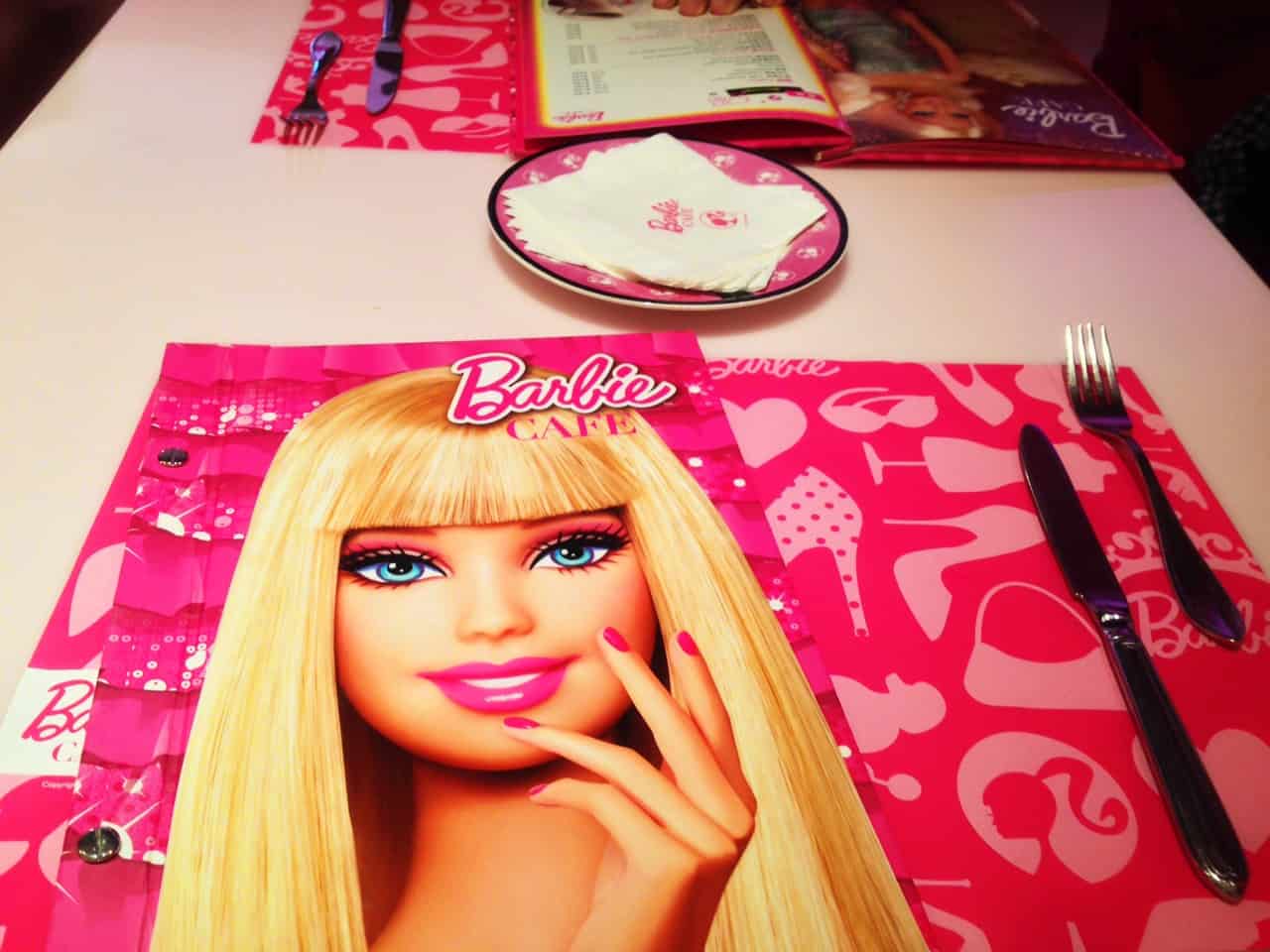 Then I started to giggle. Because it was so cheesy. 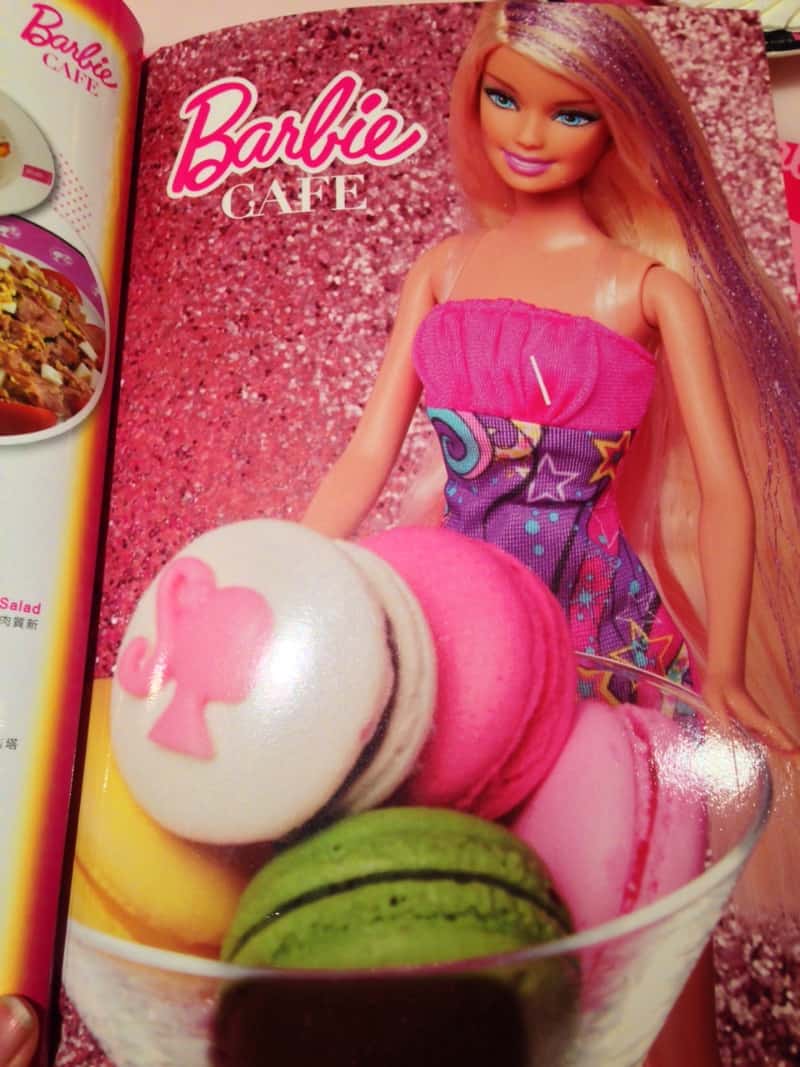 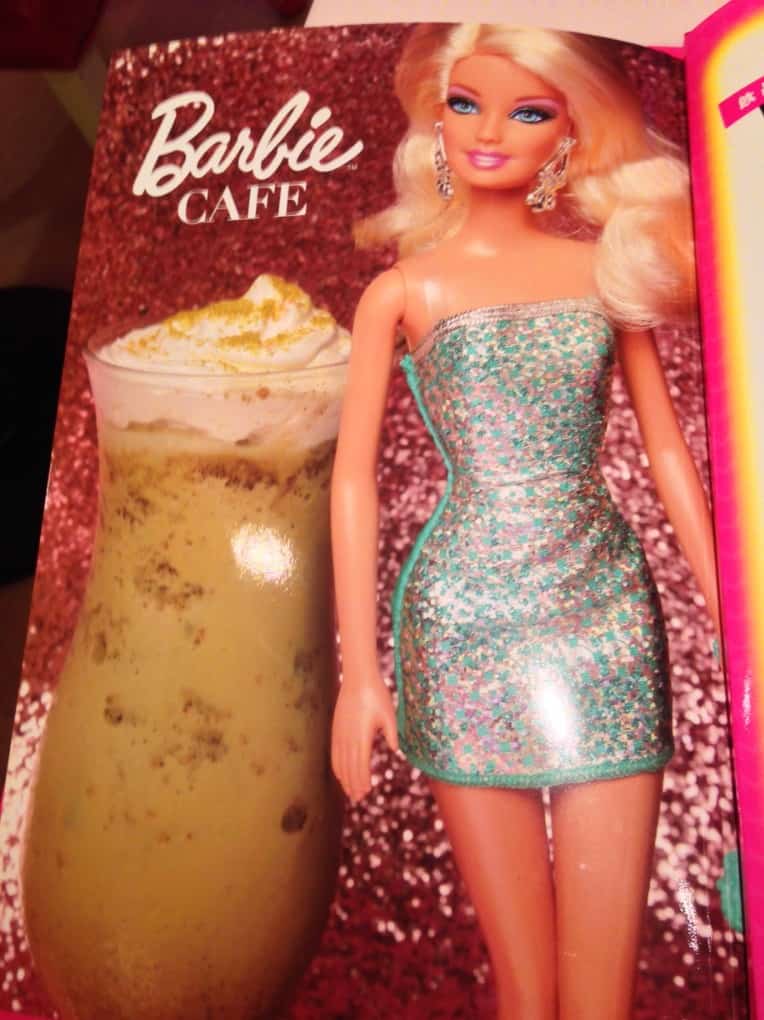 “I can’t believe you’re making me do this,” Dave muttered as he leafed through the glittery pages. It was 3 p.m. and he was starting to get hangry. It wasn’t helping that all of the servers were now ignoring our despite attempts to catch their eyes.

Eventually a waitress approached our table and Dave began to order. He was halted mid-flow.

“Sorry, sir,” she squeaked out. “We stop serving food at 3 o’clock. We only have desserts.”

Dave’s hangry eyes met mine and I was flooded with guilt.

But not for long, because I promptly ordered the biggest, over-the-top dessert on the menu. This was a tower of sponge cubes the size of my face, topped with ice cream and strawberry sauce, with a few Barbie-themed chocolate pieces stuck in the ice cream. To drink: strawberry lemonade with a pink ice cube in the shape of a heart, of course! 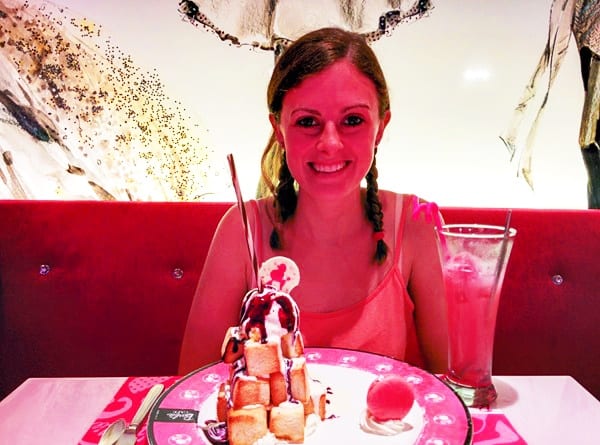 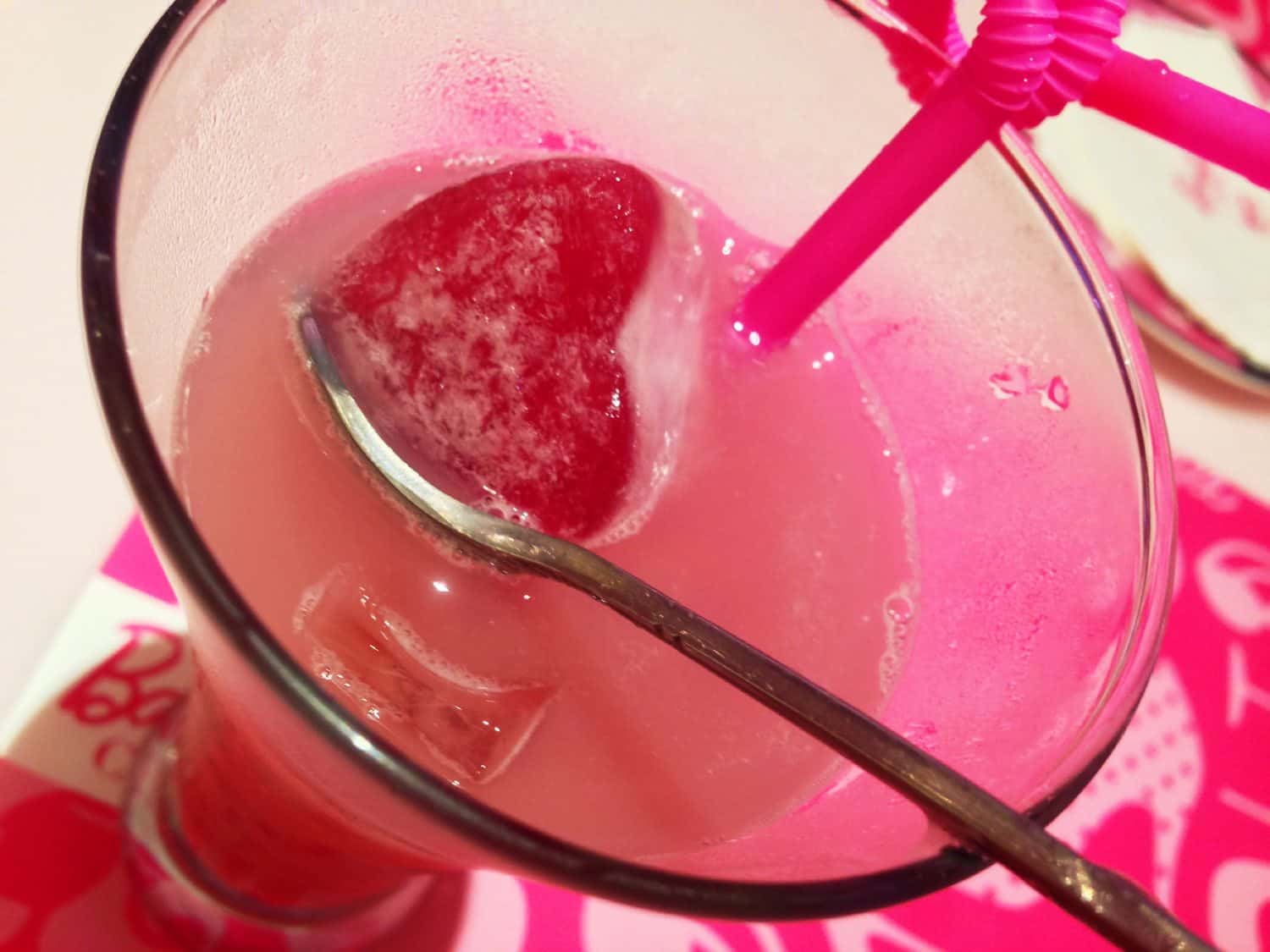 Dave went for the much more sensible option of a chocolate and blackcurrant cake and a latte that had approximately 53 times more milk than coffee. 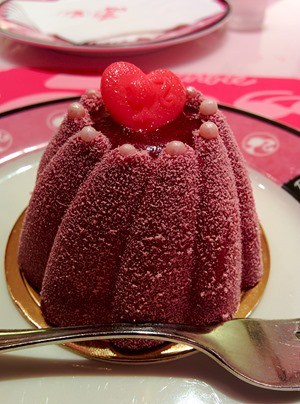 It was okay. To be honest, I can’t really judge the food because we could only eat cakes, but as desserts go, they were pretty sickly. Maybe it was because I bought the biggest dessert possible, but either way, Dave and I weren’t sat there gushing over how incredible they were. 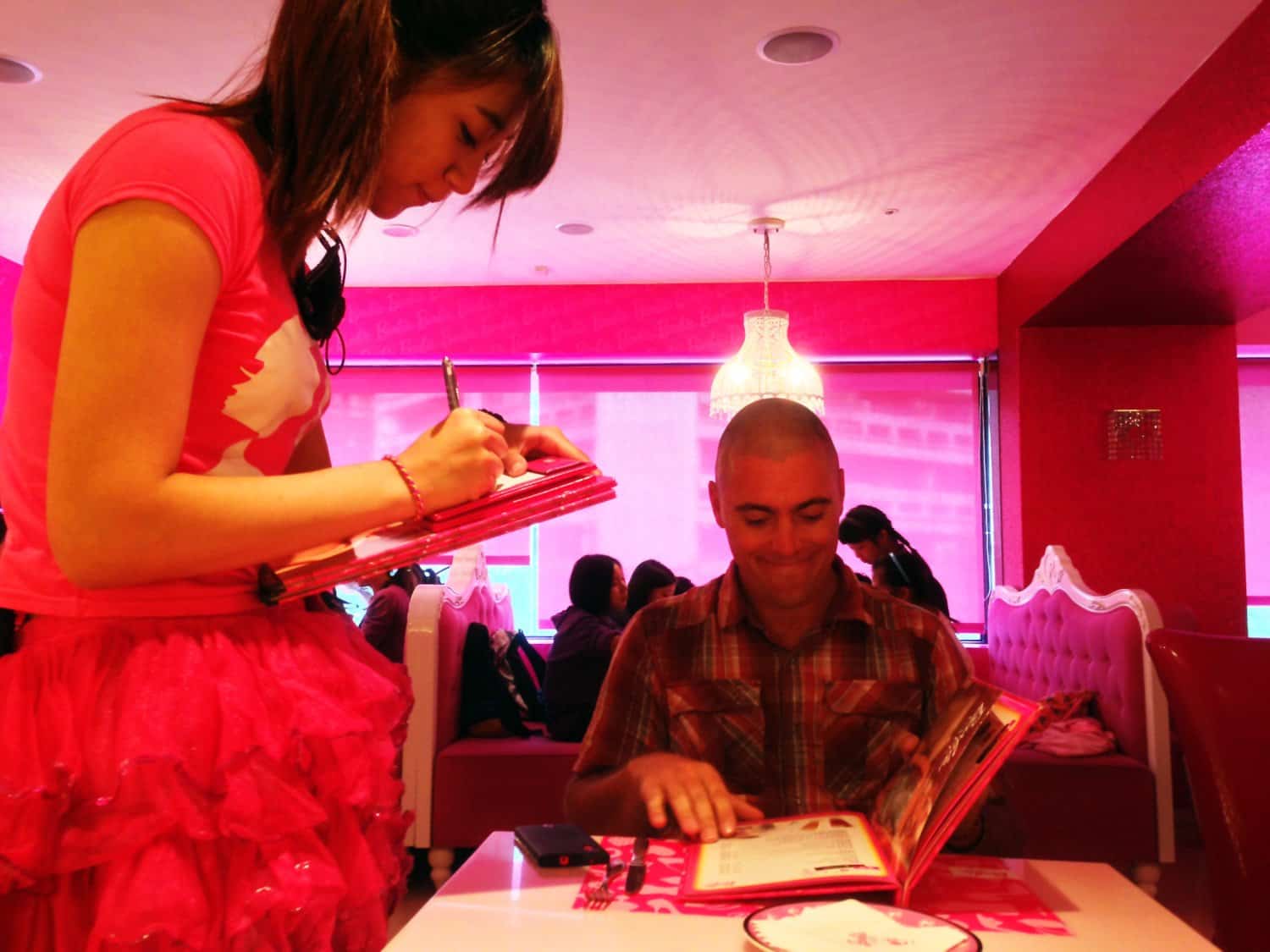 So, the final verdict of the Barbie cafe? It was probably one of my least favourite themed restaurants I’ve been to. It was strange they stopped serving meals after a certain time, the food was pretty expensive — we paid around $10 each for a dessert and drink, the staff weren’t very friendly, and service was slow.

When you visit a themed restaurant, you should never really expect the food to be amazing because you’re paying for the experience rather than the food quality, and our “meal” met those expectations.

I feel that more effort could have been made to make it more of a Barbie theme, too. It felt kind of lazy, like they’d just painted everything in the restaurant pink, slapped Barbie’s face on a few items, and given up.

I can’t be the only person who felt like this because, while Googling for the address, I just discovered the Barbie Cafe is now closed! I’m happy I got the chance to have the experience while it was open, but I can’t say I’m surprised. After receiving news the hospital restaurant I visited a few years back has also closed, I’m hoping this isn’t a sign of things to come.

Maybe I’m the only person in the world who flew to Taiwan primarily to eat at themed restaurants?

Are there any more themed restaurants in my future? Always. I’ll be jetting back to Taipei towards the end of November for a three week stay and you can bet I’ll be crossing several more off of my list. There’s now a Friends themed restaurant that has recently opened, which is all done up like Central Perk. Um, yes please!

Would you go to a Barbie themed cafe?

I Went to a Cryptozoology Museum and Everything Was Ridiculous

I’ve Fallen in Love with Raglan

How to Visit Zanzibar on a Budget

How to Pack for Spain: My Complete Packing List